"Galicia is a land of migrants. I grew up listening to salsa, cumbia, merinque and bachata," expresses Grace, "My great-grandparents lived in Cuba and Texas, my aunties in Venezuela and Brazil, my grandparents, mother and uncle in Argentina. So I am a wonderful smorgasbord of Latin sound, dance and rhythm."

LONDON, England, May 12, 2014 (SEND2PRESS NEWSWIRE) — Like a simmering plate of succulent seafood paella, Spain native Grace Rodson is serving a mouth watering concoction of Latin flavors with her debut release “Samba in My Bones” from Global Media Group and JFM Records. Skillfully stirring the flavors of flamenco, Latin, funk, Celtic and yes, samba in her delectable pot seasoned with a pop music base, Rodson sizzles as an engaging new international artist with an enchanting look and sound.

“Samba in her Bones” is a tantalizing dish of nine original recipes for dance, straight from Rodson’s heart. Performed with the intention to incite uninhibited movement, Rodson’s luscious vocals carry the listener into a realm of whirling, syncopated rhythms. While the title track sways with Brazilian heat and intensity, moving sonic beats through the air, “Way of Life” is an uptempo concoction that sprinkles in a dash of fervent hip hop flow from UK rapper T. Smith. Rodson sweetens the offering with “It Will Rain,” a seductive and sensual serenade that pulses, sways and swings with compassion. “Everything,” another entree on the menu, is a beautiful ballad that renders strength and hope.

A native of Galicia, Spain, currently living in London, Grace Rodson is a product of the music she was surrounded by as a child.

“Galicia is a land of migrants. I grew up listening to salsa, cumbia, merinque and bachata,” expresses Grace, “My great-grandparents lived in Cuba and Texas, my aunties in Venezuela and Brazil, my grandparents, mother and uncle in Argentina. So I am a wonderful smorgasbord of Latin sound, dance and rhythm. ‘Samba in My Bones’ is a celebration of the diversity in the varied cultures around me with movement being the common denominator. Music and dance are the essence of my expression. For me this project is a journey of my love stories and music is my ultimate love!”

Grace Rodson was the winner of the GSD Latin Music Awards 2011 in the categories of Best Album, Best Female Singer and Best Song. She tours and performs throughout Europe and is a singer and bandleader for Yes!!! Brazil Show, a Latin-Brazilian group. She is also the bandleader for “The Godfather of Salsa in the United King, Roberto Pla and his Latin Ensemble, who are known as the best salsa band in Europe.

Grace Rodson may have “samba in her bones” but after grooving to her debut project, music lovers will have Grace Rodson in their hearts. The project is available on iTunes at https://itunes.apple.com/us/album/samba-in-my-bones/id867447922. 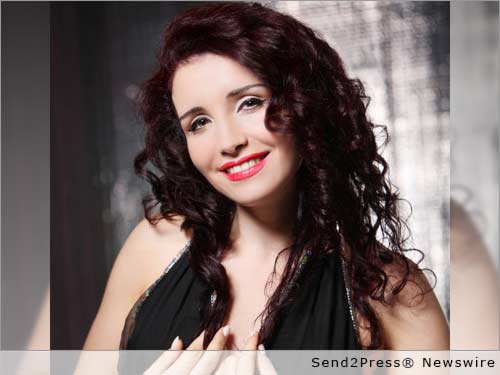 NEWS ARCHIVE NOTE: this archival news content, issued by the news source via Send2Press Newswire, was originally located in the Send2Press® 2004-2015 2.0 news platform and has been permanently converted/moved (and redirected) into our 3.0 platform. Also note the story “reads” counter (bottom of page) does not include any data prior to Oct. 30, 2016. This press release was originally published/issued: Mon, 12 May 2014 17:35:53 +0000

View More Entertainment News
"Galicia is a land of migrants. I grew up listening to salsa, cumbia, merinque and bachata," expresses Grace, "My great-grandparents lived in Cuba and Texas, my aunties in Venezuela and Brazil, my grandparents, mother and uncle in Argentina. So I am a wonderful smorgasbord of Latin sound, dance and rhythm."

ABOUT THE NEWS SOURCE:
Grace Rodson

LEGAL NOTICE AND TERMS OF USE: The content of the above press release was provided by the “news source” Grace Rodson or authorized agency, who is solely responsible for its accuracy. Send2Press® is the originating wire service for this story and content is Copr. © Grace Rodson with newswire version Copr. © 2014 Send2Press (a service of Neotrope). All trademarks acknowledged. Information is believed accurate, as provided by news source or authorized agency, however is not guaranteed, and you assume all risk for use of any information found herein/hereupon.