“Good People” is a selection of fiction that amusingly ambles through the lives of the spiritually restless and religiously furtive – individuals with a conscience who are nervously navigating the intersections of awkward friendships and strained romances. A native of New Jersey, Ripatrazone has created characters that exhibit a kind of East Coast neurosis in their stilted interactions with one another.

While the metaphorical ideology of Catholic writers like Flannery O’Connor, Evelyn Waugh and Graham Green is absent from the bulk of Ripatrazone’s work, his short stories undoubtedly remain Catholic in their tone. The spiritual ambiguity of the individuals in “Good People” often reveals the blurriness of faith that is the admitted mark of Ripatrazone’s own literary Catholicism. His short piece on the dark side of religion, “Believe,” was nominated in 2012 for the Pushcart Prize for the best short fiction in small presses.

In “Advent,” one of the briefer tales in “Good People,” nosy church ladies Catherine and Mariel go looking for Father Mark, who has mysteriously been missing at Mass since Advent, and who was recently spotted folding sweaters in the ladies department at Macy’s. Perhaps his conspicuous absence has something to do with his remarks about the need to love gays in his Advent sermon, they reason.

“Nick Ripatrazone’s ‘Advent’ offers a great example of how powerful [dialogue] can be when done well,” wrote Michael Noltemeyer, fiction editor of Blue Mesa Review. “All too often, dialogue is asked to do the heavy lifting in a story, establishing background information and setting up major plot points in rushed and unnatural ways. In contrast, Ripatrazone’s sharply drawn exchanges manage to effortlessly impart a sense of each character’s values and motivations while still retaining a natural feel.”

“Good People” is the sixth release from Ripatrazone, who has written two novellas, “This Darksome Burn” (Queen’s Ferry Press 2013) and “We Will Listen For You” (CCM Press 2015), a book of literary criticism, “The Fine Delight: Postconciliar Catholic Literature” (Cascade Books 2013), a book of poetry, “This Is Not About Birds” (Gold Wake Press 2012), and a book of prose poems/flash fiction/meditations, “Oblations” (Gold Wake Press 2011).

Nick Ripatrazone is a New Jersey native and writer of novellas, short stories, and poetry. He has published a collection of literary criticism called “The Fine Delight: Postconciliar Catholic Literature” with Cascade Books. When he isn’t writing, he keeps busy as a husband, a father of two, and as a teacher in public school and at Rutgers, Newark. He is a staff writer for The Millions. His fiction has appeared in Esquire, The Kenyon Review, and Shenandoah. For more information on his work, visit his blog at http://www.nickripatrazone.com/. 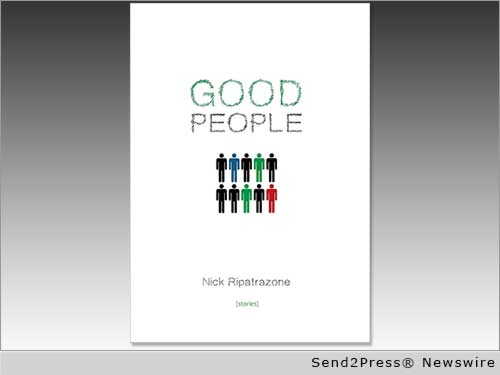 NEWS ARCHIVE NOTE: this archival news content, issued by the news source via Send2Press Newswire, was originally located in the Send2Press® 2004-2015 2.0 news platform and has been permanently converted/moved (and redirected) into our 3.0 platform. Also note the story “reads” counter (bottom of page) does not include any data prior to Oct. 30, 2016. This press release was originally published/issued: Tue, 30 Sep 2014 04:00:02 +0000