Send2Press › Wire › Environment and Ecology › No Soup for You! 22 Endangered Baby Turtles, Destined for Stock Pots, Now Safe at SoundWaters

No Soup for You! 22 Endangered Baby Turtles, Destined for Stock Pots, Now Safe at SoundWaters

"Diamondback terrapins have a lifespan of up to 40 years, so Connecticut and New York residents can follow each chapter of this success story for decades to come. Our terrapins, and our students, will grow together," says SoundWaters President Leigh Shemitz, Ph.D.

STAMFORD, Conn., Feb. 6, 2015 (SEND2PRESS NEWSWIRE) — As part of a global wildlife-trafficking issue that is growing exponentially, 22 tiny baby turtles – likely destined for soup pots in China – were recently rescued and brought to a nursery at the SoundWaters Coastal Education Center, where they are being coddled and cared for after a harrowing, near-smuggling experience.

Last fall, 211 baby turtles that had been stuffed into boots – with little air and no room to move – were confiscated from international smugglers in Alaska. In December, once they were stabilized, the turtles were shipped to permanent new homes at SoundWaters and 13 other facilities across the U.S.

Turtle soup is considered a delicacy in China, where there is a lucrative market for the main ingredient. In the U.S., a fondness for turtle soup led to the near extinction of the diamondback terrapin – the only marine species of turtle native to Connecticut – by the 1930s. Thanks to U.S. state and federal environmental regulations, terrapins are now a protected species and have been returning to their native habitats in recent years.

But, according to U.S. Fish and Wildlife Service Office of Public Affairs Chief, Gavin Shire, the scourge of wildlife trafficking is increasing. “As the population of wild turtles has been depleted in Asia, the demand for North American turtles has increased.” He adds, “Wildlife trafficking involves people in the U.S., as well, not just faceless, international criminals.”

SoundWaters President Leigh Shemitz, Ph.D. says most smuggled wild animals face a disastrous end. “This is one of those rare poaching cases with a very happy ending, and the journey isn’t over.” She adds that the rescued terrapins cannot be released back into the wild, so SoundWaters is now their permanent home. “Diamondback terrapins have a lifespan of up to 40 years, so Connecticut and New York residents can follow each chapter of this success story for decades to come. Our terrapins, and our students, will grow together.”

SoundWaters was selected to receive the 22 hatchlings because of its existing terrapin program and membership in the Diamondback Terrapin Working Group, a body of academic, scientific, regulatory and private institutions and organizations working to protect the species. With the call that the terrapins needed a home, the SoundWaters Coastal Education Center quickly set up an intensive-care nursery for the 22 fragile and travel-weary creatures.

Every day, SoundWaters staff and interns take meticulous care of the terrapins, recording each animal’s weight, food intake, medications, etc. and any other observations. They even brought the turtles to their homes during the late January blizzard, in case of power outages on Cove Island, where SoundWaters is located.

Media Open House Details: During their debut appearance, the hatchlings will be seen taking their afternoon swim, a few will be treated with medications, and all will dine on a mixture of scallops, blood worms and silverside minnows. SoundWaters staff members will be on hand to answer reporter’s questions and explain the vital role the terrapins are already playing in the education of Connecticut students. An open house for the public will be announced once the hatchlings are more established, in the spring.

Parking: Park in the lot in Cove Island Park. Walk over the footbridge and stay to the left. Continue down the path to SoundWaters Center, a large white Federalist-style house approximately 300 yards down on the left, past the playground.

About Sound Waters:
SoundWaters was founded in 1989 with the mission to protect Long Island Sound through education. As the leading environmental-education organization in the region, SoundWaters’, award-winning, hands-on programs engage over 27,000 students at their Coastal Education Center, in Stamford, on their 80-foot, three-masted schooner, and at schools, community centers and field sites throughout the region. Public offerings include captivating volunteer and community events, public and charter-sailing adventures, birthday parties, scouting programs, and more. 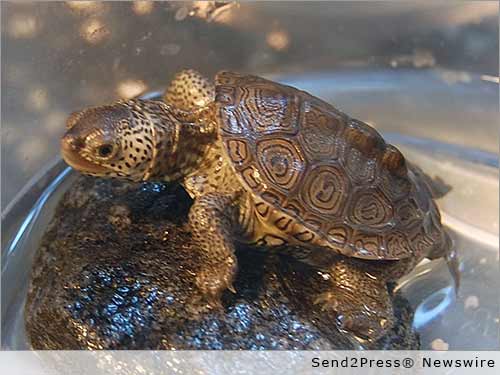 NEWS ARCHIVE NOTE: this archival news content, issued by the news source via Send2Press Newswire, was originally located in the Send2Press® 2004-2015 2.0 news platform and has been permanently converted/moved (and redirected) into our 3.0 platform. Also note the story “reads” counter (bottom of page) does not include any data prior to Oct. 30, 2016. This press release was originally published/issued: Fri, 06 Feb 2015 09:00:01 +0000

View More Environment and Ecology News
"Diamondback terrapins have a lifespan of up to 40 years, so Connecticut and New York residents can follow each chapter of this success story for decades to come. Our terrapins, and our students, will grow together," says SoundWaters President Leigh Shemitz, Ph.D.

ABOUT THE NEWS SOURCE:
SoundWaters

LEGAL NOTICE AND TERMS OF USE: The content of the above press release was provided by the “news source” SoundWaters or authorized agency, who is solely responsible for its accuracy. Send2Press® is the originating wire service for this story and content is Copr. © SoundWaters with newswire version Copr. © 2015 Send2Press (a service of Neotrope). All trademarks acknowledged. Information is believed accurate, as provided by news source or authorized agency, however is not guaranteed, and you assume all risk for use of any information found herein/hereupon.