"Though we work on projects of all sizes, it's very exhilarating to see the fruits of our labor in highly visible places such as AT&T Stadium in Arlington, Texas," states President and CEO Amy Naukam. "It reminds us when we think big, we accomplish just as big."

IRVING, Texas, Feb. 2, 2016 (SEND2PRESS NEWSWIRE) — As North Texas creative and design agency the Bubble™ enters its 17th year in business, the company has plenty of linchpin client campaigns to reflect on – from the College Football Playoffs, Super Bowl XLV, the NBA, Texas Rangers and the Crowne Plaza Invitational to Six Flags, Sony, Kraft, Axe and Levi’s – but more importantly, a host of highly-visible projects to be announced in 2016.

The Bubble’s™ scope of design, project management, signage, wraps and banner programs is but a brush stroke of its capabilities. The company’s tailored approach allows it to remain versatile in fulfilling roles beyond the one dimensional ad agency, sign shop or project management firm – in turn making it a ‘hybrid agency’ – able to accomplish customized needs in a variable of sizes. The company’s large scale work has been seen by hundreds of thousands of sports fans at AT&T Stadium, thrill-seeking enthusiasts at Six Flags Theme Parks and Hurricane Harbor, and most recently at Dallas Sea Life Aquarium.

The visual communication the Bubble™ has provided for its clients over the years has been integral in successfully boosting traffic and representing a brand’s messaging – from experiential media to wrapped rollercoasters. 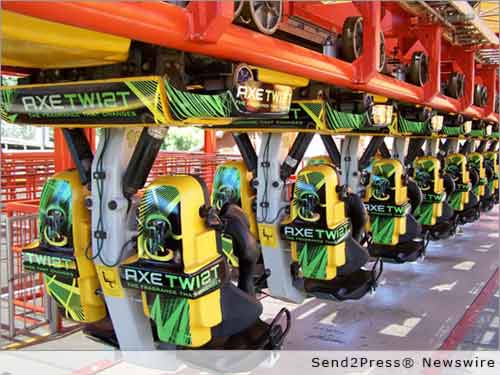 “We’ve relied on the Bubble to design, produce, install and manage many of our ‘Domination’ programs,” states John Gray, VP Corporate Alliance Marketing and Promotions, – Six Flags Entertainment. “Their team has always been responsive, on-time and fast to deliver.”

“Though we work on projects of all sizes, it’s very exhilarating to see the fruits of our labor in highly visible places such as AT&T Stadium in Arlington, Texas,” states President and CEO Amy Naukam. “It reminds us when we think big, we accomplish just as big.”

The Bubble™ is currently preparing for its most successful year in 2016 with upcoming partnership announcements within community and major sporting events.

For more information on the Bubble™ visit http://bethebubble.com/ or their social networks:

About the Bubble™:
A WBE & HUB certified creative and visual communications company based in Dallas/Fort Worth, Texas (formerly Risner Naukam Design Group), the Bubble™ is a “hybrid-agency” that helps execute programs by turning napkin sketches into reality, while providing an engaging and emotional consumer experience that defines and creates mass attention for brands.

Whether the project requires a local or national reach, each client gets the same personal attention, expert service and quality to execute the project with precision. the Bubble™ is consistent in completing projects right the first time and we take pride in knowing your success, is our success.

News issued by: the Bubble

NEWS ARCHIVE NOTE: this archival news content, issued by the news source via Send2Press Newswire, was originally located in the Send2Press® 2004-2015 2.0 news platform and has been permanently converted/moved (and redirected) into our 3.0 platform. Also note the story “reads” counter (bottom of page) does not include any data prior to Oct. 30, 2016. This press release was originally published/issued: Tue, 02 Feb 2016 16:33:36 +0000

View More Advertising and Marketing News
"Though we work on projects of all sizes, it's very exhilarating to see the fruits of our labor in highly visible places such as AT&T Stadium in Arlington, Texas," states President and CEO Amy Naukam. "It reminds us when we think big, we accomplish just as big."

More from The Bubble

ABOUT THE NEWS SOURCE:
The Bubble

RSS News Feed for The Bubble

LEGAL NOTICE AND TERMS OF USE: The content of the above press release was provided by the “news source” The Bubble or authorized agency, who is solely responsible for its accuracy. Send2Press® is the originating wire service for this story and content is Copr. © The Bubble with newswire version Copr. © 2016 Send2Press (a service of Neotrope). All trademarks acknowledged. Information is believed accurate, as provided by news source or authorized agency, however is not guaranteed, and you assume all risk for use of any information found herein/hereupon.