"Cameras will not stop drivers from violating the law," said Curtiss Routh, vice president of sales at Radio Engineering Industries. "But if drivers know they will be recorded on video cameras, and if drivers are prosecuted, the illegal behavior may be reduced."

OMAHA, Neb., Sept. 14, 2015 (SEND2PRESS NEWSWIRE) — Across America millions of students travel to school in the more than 100,000 school buses that transport students daily, says Curtiss Routh of Radio Engineering Industries. As they get on or off the bus, each child is in danger of being hit by a motorist who disobeys the flashing red light of the bus’s stop arm signal. Last year, nearly 76,000 illegal passes were documented during a one-day survey conducted nationwide – this translates to 13.68 million illegal passes annually. And there have been deaths.

A video camera system developed by an Omaha, Nebraska, manufacturing and engineering company improves student safety by spotting drivers making the illegal passes. Radio Engineering Industries has designed a system that attaches up to five video cameras on the side of a school bus. The cameras automatically record the make, model and license plate of vehicles that drive through the bus’s extended stop arm. The system wirelessly sends the information to school officials who can analyze the data and send it to law enforcement for follow up.

It is illegal in every state to drive through the bus stop-arm, which extends a stop sign and triggers flashing lights when the bus stops to load or unload passengers. In some jurisdictions, video evidence can be used to prompt a citation and fines can be up to $500 in some states.

Last year, six school children were killed in the United States by vehicles that had been driven through stop-arms; since 1971 more than 1,200 fatalities have been recorded. In a one-day survey of 29 states, more than 97,000 school bus drivers reported nearly 76,000 illegal passes; across an entire 180-day school year, that comes to 13.68 million violations, according to the National Association of State Directors of Pupil Transportation Services.

School bus drivers, who are busy with students entering or leaving the bus, often do not have time to write down information about drivers who violate the stop-arms. The camera-capture system records violators, allowing bus drivers to concentrate on student safety.

In their home state of Nebraska, Radio Engineering Industries has partnered with Bellevue Public Schools to place systems on 10 of Bellevue’s buses. Rich Casey, Bellevue Public Schools transportation director, said that last school year the district documented 163 violations and estimated there were more than 500 undocumented violations. While no students have been hit, the chances are greater when drivers violate the stop-arms.

“Cameras will not stop drivers from violating the law,” said Curtiss Routh, vice president of sales at Radio Engineering Industries. “But if drivers know they will be recorded on video cameras, and if drivers are prosecuted, the illegal behavior may be reduced; statistics show that fewer than 1 percent of those ticketed receive a second citation.” Routh said enhanced student safety is the top reason driving the installation of these systems.

Police also are involved in the partnership; they believe the cameras will be a valuable tool for driver education and enforcement. Statistics from America Traffic Solutions, a national company that supplies road safety camera equipment, indicate jurisdictions employing similar systems see significant decreases in stop-arm violations.

The Radio Engineering Industries system has rear- and forward-facing high-definition cameras that capture vehicles in up to four lanes of traffic going as fast as 100 miles per hour. The system works in the dark or during rain. The system records the vehicles’ rear and front license plates, the bus’s extended stop-arm and safety indicators, and uploads the data and video violation information to the school’s computer, where officials can review.

Radio Engineering Industries was founded in 1938 and specializes in commercial electronics for manufacturers, suppliers and operators in the transportation and agriculture industries. The company employs about 135 individuals at its plant in Omaha. 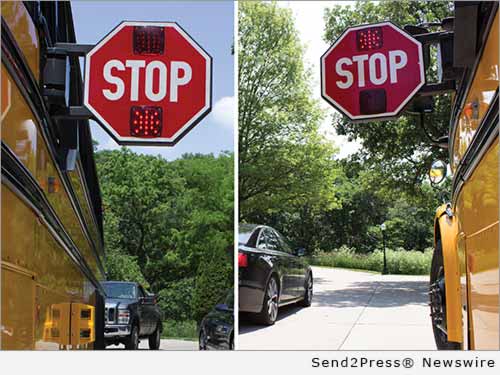 NEWS ARCHIVE NOTE: this archival news content, issued by the news source via Send2Press Newswire, was originally located in the Send2Press® 2004-2015 2.0 news platform and has been permanently converted/moved (and redirected) into our 3.0 platform. Also note the story “reads” counter (bottom of page) does not include any data prior to Oct. 30, 2016. This press release was originally published/issued: Mon, 14 Sep 2015 15:14:16 +0000

View More Education and Schools News
"Cameras will not stop drivers from violating the law," said Curtiss Routh, vice president of sales at Radio Engineering Industries. "But if drivers know they will be recorded on video cameras, and if drivers are prosecuted, the illegal behavior may be reduced."

LEGAL NOTICE AND TERMS OF USE: The content of the above press release was provided by the “news source” Radio Engineering Industries or authorized agency, who is solely responsible for its accuracy. Send2Press® is the originating wire service for this story and content is Copr. © Radio Engineering Industries with newswire version Copr. © 2015 Send2Press (a service of Neotrope). All trademarks acknowledged. Information is believed accurate, as provided by news source or authorized agency, however is not guaranteed, and you assume all risk for use of any information found herein/hereupon.