"I look forward to competing in the upcoming Olympics and representing not only the country of Cape Verde but also the large community of Cape Verdeans who live here in the United States," said Andrade.

LOS ANGELES, Calif., April 14, 2016 (SEND2PRESS NEWSWIRE) — U.S. born track and field champion Jordin Andrade has never been to his native country, Cape Verde, but the Olympic hopeful has their full support. On Sunday, April 17, 2016, at 4 p.m., “On the Run 2 Rio,” a celebration fundraiser is being held in his honor. The event will take place at the El Dorado Park West Social Center, 2800 North Studebaker Road in Long Beach, CA. The occasion is planned to provide support for Andrade as he fulfills his dream to represent Cape Verde and bring home the gold in the 2016 Summer Olympics in Rio de Janeiro.

A dual citizen, Andrade was born to run! Jordin’s father, Joe Andrade, was a member of the 1972 California State Championship team while in high school and was the State Champion in the 300-meter low hurdles in 1973. His uncle and current manager however, Henry Andrade, was an actual 1996 Olympian in the 110 meter hurdles and a first-time Olympic representative for the country Cape Verde. Andrade’s participation is the continuation of a family legacy.

“It’s almost unbelievable that my young nephew is now continuing a dream I had with his participation in the 2016 Summer Olympics and that I am managing him as he does so. His stamina, drive and commitment make me beyond proud,” cites Henry Andrade.

Jordin Andrade earned a track and field scholarship to Boise State University in Boise, Idaho where he began All-Big West Champion, All-American and NCAA Silver medalist in the 400-meter hurdles in 2015 in 49.26. Andrade was ranked #9 in the United States by Track and Field News and #22 in the world. Jordin has met the Olympic qualifying standard for the 400-meter hurdles and though a U.S. resident, has been granted dual citizenship by the Republic of Cape Verde and will officially represent the country in the 2016 Rio de Janeiro Olympic Games.

In preparation for the Olympics, Jordin will be competing at the Mt. Sac Relays to open this outdoor season on April 16, 2016 at Cerritos College and then will compete internationally in Trinidad and Tobago, Guatemala, Durbin, South Africa, Oslo Norway and London, England.

“I look forward to competing in the upcoming Olympics and representing not only the country of Cape Verde but also the large community of Cape Verdeans who live here in the United States. The country is a small but extremely beautiful land, and I am honored to bring international attention to them with my athletic efforts,” adds Andrade.

Jordin will be honored in New Bedford, Mass. on July 2, 2016 and in Praia, Cape Verde on July 17, 2016, for outstanding achievement as Cape Verde celebrates its Independence Day.

For more information on “On the Run 2 Rio,” go to https://www.eventbrite.com/e/on-the-run-2-rio-olympic-bound-jordin-andrade-celebration-fundraiser-tickets-23821611080 and to support Jordin Andrade go to https://www.gofundme.com/ym7cvbec. 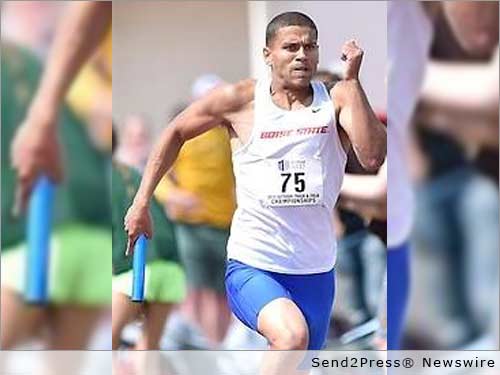 NEWS ARCHIVE NOTE: this archival news content, issued by the news source via Send2Press Newswire, was originally located in the Send2Press® 2004-2015 2.0 news platform and has been permanently converted/moved (and redirected) into our 3.0 platform. Also note the story “reads” counter (bottom of page) does not include any data prior to Oct. 30, 2016. This press release was originally published/issued: Thu, 14 Apr 2016 16:58:22 +0000

View More California Business News
"I look forward to competing in the upcoming Olympics and representing not only the country of Cape Verde but also the large community of Cape Verdeans who live here in the United States," said Andrade.

ABOUT THE NEWS SOURCE:
Jordin Andrade

LEGAL NOTICE AND TERMS OF USE: The content of the above press release was provided by the “news source” Jordin Andrade or authorized agency, who is solely responsible for its accuracy. Send2Press® is the originating wire service for this story and content is Copr. © Jordin Andrade with newswire version Copr. © 2016 Send2Press (a service of Neotrope). All trademarks acknowledged. Information is believed accurate, as provided by news source or authorized agency, however is not guaranteed, and you assume all risk for use of any information found herein/hereupon.