CAMBRIDGE, Mass., Sept. 25, 2015 (SEND2PRESS NEWSWIRE) — An Internet group therapy service has initiated a program to provide psychological support for the thousands of refugees from the Middle East and North Africa who are currently trekking across Europe seeking new homes. In cooperation with the Adelina Foundation and Friends Beyond Borders, Growthnet, a U.S. company that offers various kinds of group counseling via web conferencing, is offering no-cost online sessions to any refugee who applies, according to its CEO, John Toomey.

“These people are entering Europe with all kinds of needs,” Toomey says. “The governments in Europe are overcome with just handling practical things like food and shelter, so psychological and emotional traumas associated with the journey often go untreated. Some of these people have crossed the Mediterranean in leaky boats, been beaten by traffickers, and lost loved ones along the way. As long as we are able, we will help them adjust.”

Key to the program’s success is translation software newly developed by translateyourworld.com/.

The refugees typically speak languages like Arabic, Kurdish, Berber, and Hausa, and cannot understand therapists who speak only European languages. The new software allows the counselor to speak German, English, French, Russian, Spanish, Italian, Portuguese, Greek, or Russian, but the client can read the therapist’s words in real time on their Smart phone or computer screen in Arabic, Turkish, Azeri, Swahili, or several other languages.

“Most people from the Middle East come from countries where psychotherapy is not common,” says Soani Gunawan, language director for the project. “So being able to communicate with them in their own tongue can be critical not only to make them comfortable, but to allow them to see why counseling can be immensely beneficial to them during the kinds of ordeals they are facing.”

An additional benefit to using the immediate translation software is that clients become more at ease with the native language of the country they are entering. A typical interaction, for example, is a German speaking therapist counseling an Arabic-speaking client. Since Germany is interested in assimilating refugees who qualify to remain as permanent residents, such an interaction is useful in helping the migrant learn a new tongue, since they are hearing the host language (German) at the same time as they read the target language (Arabic).

Plans are in the works to extend the program to other refugee crises, such as those facing the Rohingya in Southeast Asia, and Hutu and Tutsi peoples in Rwanda and Congo.

News issued by: Friends Beyond Borders 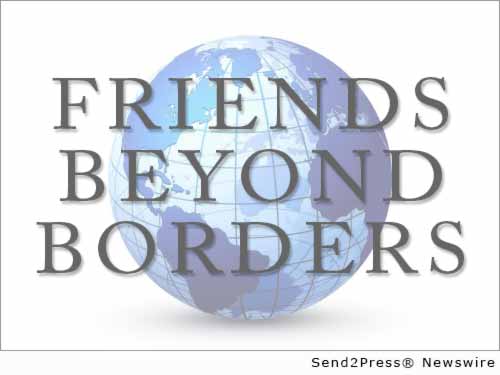 NEWS ARCHIVE NOTE: this archival news content, issued by the news source via Send2Press Newswire, was originally located in the Send2Press® 2004-2015 2.0 news platform and has been permanently converted/moved (and redirected) into our 3.0 platform. Also note the story “reads” counter (bottom of page) does not include any data prior to Oct. 30, 2016. This press release was originally published/issued: Fri, 25 Sep 2015 16:08:32 +0000

More from Friends Beyond Borders

ABOUT THE NEWS SOURCE:
Friends Beyond Borders

LEGAL NOTICE AND TERMS OF USE: The content of the above press release was provided by the “news source” Friends Beyond Borders or authorized agency, who is solely responsible for its accuracy. Send2Press® is the originating wire service for this story and content is Copr. © Friends Beyond Borders with newswire version Copr. © 2015 Send2Press (a service of Neotrope). All trademarks acknowledged. Information is believed accurate, as provided by news source or authorized agency, however is not guaranteed, and you assume all risk for use of any information found herein/hereupon.