There is a reception at 6 p.m. followed by the performance at 7 p.m.

Tickets are $124. For information and tickets visit http://www.oberontheatre.org or call Ovation Tix at (212) 352-3101. Seating is extremely limited.

Founded in 1997, Oberon Theatre Ensemble is an off off Broadway ensemble theatre company. Now entering its 19th season, Oberon has produced 57 full length productions and 100 staged readings of original plays. Oberon has 20 active members and many more regular collaborators, including award winning actors, playwrights, directors and designers. Oberon Theatre Ensemble is an active player in New York’s independent theatre community. Oberon believes in the joy of a well told story, the connection offered by a supportive community, and the magic of the theatre.

Tickets are $124. For tickets and information visit http://www.oberontheatre.org or call Ovation Tix (212) 352-3101. Seating is extremely limited. 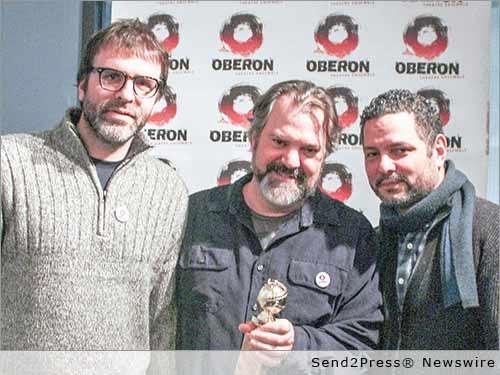 NEWS ARCHIVE NOTE: this archival news content, issued by the news source via Send2Press Newswire, was originally located in the Send2Press® 2004-2015 2.0 news platform and has been permanently converted/moved (and redirected) into our 3.0 platform. Also note the story “reads” counter (bottom of page) does not include any data prior to Oct. 30, 2016. This press release was originally published/issued: Wed, 11 May 2016 15:11:23 +0000

LEGAL NOTICE AND TERMS OF USE: The content of the above press release was provided by the “news source” Oberon Theatre Ensemble or authorized agency, who is solely responsible for its accuracy. Send2Press® is the originating wire service for this story and content is Copr. © Oberon Theatre Ensemble with newswire version Copr. © 2016 Send2Press (a service of Neotrope). All trademarks acknowledged. Information is believed accurate, as provided by news source or authorized agency, however is not guaranteed, and you assume all risk for use of any information found herein/hereupon.