NEW YORK, N.Y., Oct. 27, 2014 (SEND2PRESS NEWSWIRE) — Great new style resumes can be 10 to 20 times more effective, says Robert Gerberg, creator of the TAPIT Worldwide System (www.tapitworldwidesystem.com) and author of “The Professional Job Changing System,” and dozens of other books on job hunting. Gerberg has released entirely new guidelines for professionals and executives seeking from $60,000 to $300,000+, with his “Outstanding New Style Resumes and Letters – 2015 Edition.”

His new e-book “Outstanding New Style Resumes and Letters – 2015 Edition” is available on Amazon.com for $2.99. This short book is remarkably easy to read and it can significantly impact the results of your job search. Market changes have created an entirely new playing field-along with different guidelines for achieving success.

Far too many professionals still rely on traditional historical resumes. But with the amount of competition, the fact is that they don’t work any more. Mr. Gerberg’s philosophy is similar to one expressed in a major Wall Street Journal cover story entitled, “Resume Oblivion.”

In a world where hundreds of resumes are submitted to a single attractive advertisement – there are seven major resume weaknesses, any of which will immediately get your resume tossed into the waste basket.

1. If your position goals aren’t clearly identified at the top of your resume, readers won’t be able to figure out where you fit-and won’t take the time to try and do it.

2. If your resume simply looks like all the others, you’ll be out of luck right from the start. Great resumes must get a person’s attention. They need to be project a distinctive image and never be plain vanilla or flat. Being boring doesn’t work.

3. Your resume can’t reveal liabilities. If it does, you will immediately be ruled out. Liabilities such as age, being out of work for a while, having changed jobs too often are the “kiss of death.” In his new book Mr. Gerberg cites 20 liabilities that most be concealed.

4. If you’re just selling where you’ve been and your accomplishments, and not strongly emphasizing your transferable skills, you won’t get to first base. Selling skills is a necessity if you want to build your appeal beyond your factual credentials. These are also a must if you want to change industries, join a growth firm, or impress C-level executives and other key decision makers. Today people get hired for what they can do.

5. If your writing isn’t interesting and compelling, it won’t motivate the person on the receiving end to take action. Today no one takes the time to study resumes. The words you select need to have some reasonable punch, substance and sparkle – otherwise it will be sure to end up in the “reject pile.”

6. If your resume doesn’t provide a 20 to 30 second summary, it is likely to go unread. So work hard at developing 15 to 20 lines of copy that have some “wow” value. And, remember the worst thing you can do is undersell yourself.

7. If your resume isn’t scanning ready, you’ll never be considered for a great many positions where you could have performed very well. When employers and recruiters are looking for someone, they input keywords – bring up matching resumes – and review them. That determines who gets the interviews.

Robert James Gerberg is among America’s foremost authorities on professional job hunting. For more than 25 years he has authored dozens of books and multimedia presentations. He is also the creator of the TAPIT Worldwide System – a way for people to instantly connect with 97 percent of all jobs that are advertised anywhere in the U.S. – and also recent continuous daily leads and contacts.

His current e-books available on Amazon include “20 New Rules for Job Hunting Success,” “An Easier Way to Change Jobs,” “The 12 Most Popular New Career Directions for Executives,” “The Ultimate Guide to Interviewing and Negotiating,” “What To Do If You’re Unemployed or Have Age Concerns,” “2015 Career Guide for People Leaving Education, the Military or Wall Street,” and “Outstanding New Style Resumes and Letters.” 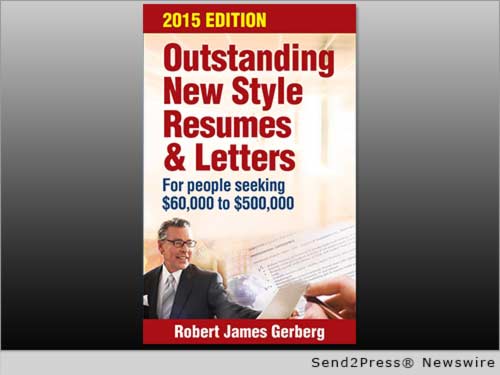 NEWS ARCHIVE NOTE: this archival news content, issued by the news source via Send2Press Newswire, was originally located in the Send2Press® 2004-2015 2.0 news platform and has been permanently converted/moved (and redirected) into our 3.0 platform. Also note the story “reads” counter (bottom of page) does not include any data prior to Oct. 30, 2016. This press release was originally published/issued: Mon, 27 Oct 2014 07:00:01 +0000