"The Earthquake will harness the power of Americans nationwide to support Governor Palin," said Sandra Bailey. "America is struggling, and President Obama and Washington business-as-usual politicians are the problem."

ALBUQUERQUE, N.M., Jan. 7, 2015 (SEND2PRESS NEWSWIRE) — Supporters of Governor Sarah Palin announce the formation of The Political Earthquake PAC/Grassroots4Palin, a Super PAC which will independently advocate on behalf of Palin and the leadership and vision that she has for our nation.

“The Earthquake will harness the power of Americans nationwide to support Governor Palin,” said Sandra Bailey. “America is struggling, and President Obama and Washington business-as-usual politicians are the problem. The Earthquake will support a leader who has inspired millions, who understands that government stands in the way of unleashing America’s entrepreneurial spirit, and who believes America must remain the world’s superpower.”

Bailey added, “America needs Governor Palin’s leadership as a commonsense Constitutional Conservative not to continue to fundamentally change America, but to restore America. The American people are ready for a leader with integrity, who has been thoroughly vetted and has proven she will work to rid our government of the cronyism that gets in the way of doing the people’s work. America needs Governor Palin’s leadership.”

The Earthquake is a grassroots-powered organization administered by Sandra Bailey.

The Political Earthquake PAC is on a mission to shake the establishment to its core and offer to America, a candidate who not only is qualified and fully vetted, but also one who loves this Country, its military and citizens, and one who has the heart of a true public servant-leader. 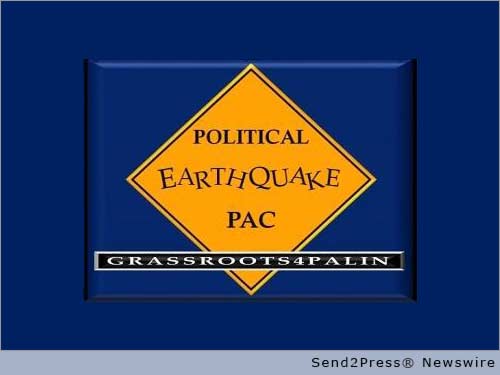 NEWS ARCHIVE NOTE: this archival news content, issued by the news source via Send2Press Newswire, was originally located in the Send2Press® 2004-2015 2.0 news platform and has been permanently converted/moved (and redirected) into our 3.0 platform. Also note the story “reads” counter (bottom of page) does not include any data prior to Oct. 30, 2016. This press release was originally published/issued: Wed, 07 Jan 2015 17:04:28 +0000

View More Elections and Politics News
"The Earthquake will harness the power of Americans nationwide to support Governor Palin," said Sandra Bailey. "America is struggling, and President Obama and Washington business-as-usual politicians are the problem."

LEGAL NOTICE AND TERMS OF USE: The content of the above press release was provided by the “news source” Political Earthquake PAC Grassroots4Palin or authorized agency, who is solely responsible for its accuracy. Send2Press® is the originating wire service for this story and content is Copr. © Political Earthquake PAC Grassroots4Palin with newswire version Copr. © 2015 Send2Press (a service of Neotrope). All trademarks acknowledged. Information is believed accurate, as provided by news source or authorized agency, however is not guaranteed, and you assume all risk for use of any information found herein/hereupon.