"I was inspired by music artist such as Ed Sheeran, John Mayer and The Script to do the 'Simplified' project. The ingenious of their music and soulful sounds resonate within me," says Mic Tunez.

HOUSTON, Texas, Nov. 5, 2014 (SEND2PRESS NEWSWIRE) — Pop Artist Mic Tunez (pronounced Mike Tunes) announces the debut of his first acoustic album, released on September 21, 2014. The “Simplified” project was recorded in the world-class Wire Road Studios where other renowned music artists record such as Grammy Award Winner Beyonce’, India Arie and Wiz Khalifa. The sounds of Mic Tunez will capture not only the ear but the soul of listeners. This CD is the next hottest attraction on the pop genre circuit, says Tunez.

“I was inspired by music artist such as Ed Sheeran, John Mayer and The Script to do the ‘Simplified’ project. The ingenious of their music and soulful sounds resonate within me,” says Mic Tunez.

Mic Tunez also shares “I may not know in detail what women go through, but I know I wouldn’t be here if it had not been for a woman.” He’s in pursuit of joint venture campaigns with organizations that bring awareness to such issues to empower individuals around the world through the lyrics and sounds of his music.

Amir Diamond, a radio announcer of Houston radio station 97.9FM The Box says, “People think my life has been all diamonds and gold, but the truth is I’ve been faced with a lot of adversity. There were people who laughed at my vision for the mark I wanted to make on this world. Mic Tunez songs got me through that time period (just a few months ago). Long story short: I just purchased your new album, man!”

Mic Tunez (Micheal Washington, Jr.) is a resident of Houston, Texas, but his musical roots run deep to his hometown New Orleans, La., known for its enriched Jazz and R&B music. An aspired musician from his youth, he plays instruments such as the guitar, keyboard and drums with the unique sound of his voice.

“Performing is second nature to me,” Mic Tunez concludes as he speaks of his performances at venues such as the House of Blues and Avant Garden of Houston. He was a participant on The Writer’s Block sponsored by Revolt, a Sean “P. Diddy” Combs Network, featured in Houston Young Magazine sponsored by Fiat and selected to audition for the reality television show “The Voice” during the 2011 season. 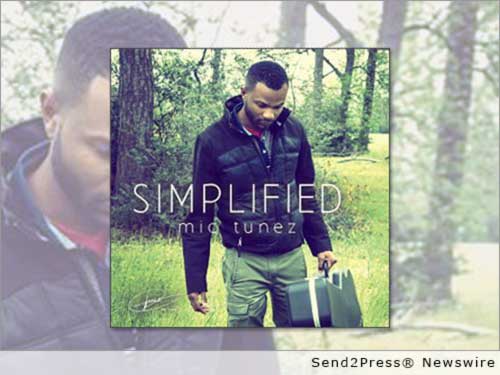 NEWS ARCHIVE NOTE: this archival news content, issued by the news source via Send2Press Newswire, was originally located in the Send2Press® 2004-2015 2.0 news platform and has been permanently converted/moved (and redirected) into our 3.0 platform. Also note the story “reads” counter (bottom of page) does not include any data prior to Oct. 30, 2016. This press release was originally published/issued: Wed, 05 Nov 2014 07:01:01 +0000

View More Entertainment News
"I was inspired by music artist such as Ed Sheeran, John Mayer and The Script to do the 'Simplified' project. The ingenious of their music and soulful sounds resonate within me," says Mic Tunez.

ABOUT THE NEWS SOURCE:
Mic Tunez

LEGAL NOTICE AND TERMS OF USE: The content of the above press release was provided by the “news source” Mic Tunez or authorized agency, who is solely responsible for its accuracy. Send2Press® is the originating wire service for this story and content is Copr. © Mic Tunez with newswire version Copr. © 2014 Send2Press (a service of Neotrope). All trademarks acknowledged. Information is believed accurate, as provided by news source or authorized agency, however is not guaranteed, and you assume all risk for use of any information found herein/hereupon.