WARWICK, N.Y., July 20, 2011 (SEND2PRESS NEWSWIRE) — The winners of The 2011 Communicator Awards were recently announced by the International Academy of the Visual Arts. Positive Sounds is a weekly Contemporary Christian Music (CCM) Radio Program hosted by Bob Taylor. It earned an Award of Excellence, the highest honor in the Radio Programs Category.

With thousands of entries received from across the U.S. and around the world, The Communicator Awards is the largest and most competitive competition honoring creative excellence for communications professionals.

The Communicator Awards are judged and overseen by the International Academy of the Visual Arts (IAVA), a 550+ member organization of leading professionals from various disciplines. They are dedicated to embracing progress in the evolving nature of traditional and interactive media. Current IAVA membership represents a “Who’s Who” of acclaimed media, advertising, and marketing firms including: Conde Nast, Coach, Disney, Estee Lauder, HBO, Monster.com, MTV, Polo Ralph Lauren, Sotheby’s Institute of Art, Tribal DDB, Wired, Yahoo!, and many others.

“Having the ability to program music that encourages the lives of people with the message of God’s love is a blessing to all who are touched by it,” said Bob Taylor, host and programmer of Positive Sounds. “The goal is to remind New York area listeners that God is on their side, and loves them no matter how bad things seem to be in their lives. I am blessed by the opportunity that WTBQ has given me to create this program, and feel fortunate to record and do pre-production at the facilities of the Max Radio Network. The ratings success is proof of God’s favor in action.”

“We’re happy that Positive Sounds has won this prestigious award. The message heard in the songs adds a real encouraging sound to our programming,” said Frank Truatt, President of WTBQ. “At WTBQ, we’re about quality, and Positive Sounds has exceeded our expectations. We embrace and value our close relationship with the Max Radio Network.”

For more information about the Communicator Awards, please visit: www.communicatorawards.com .

About WTBQ:
WTBQ is Orange County, New York’s only radio station focusing on local issues and events, along with national radio programs from Neal Boortz, Clark Howard and John Tesh.

About Max Radio Network, LLC:
Max Radio Network, LLC is a radio production company based in Secaucus, New Jersey producers of weekly syndicated programs, including “The Magic of The 80s with Tom Furci,” custom programming for local stations, podcasts, as well as Positive Sounds with Bob Taylor. 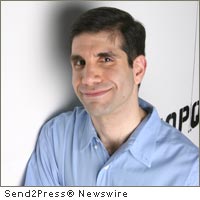 NEWS ARCHIVE NOTE: this archival news content, issued by the news source via Send2Press Newswire, was originally located in the Send2Press® 2004-2015 2.0 news platform and has been permanently converted/moved (and redirected) into our 3.0 platform. Also note the story “reads” counter (bottom of page) does not include any data prior to Oct. 30, 2016. This press release was originally published/issued: Wed, 20 Jul 2011 18:39:01 +0000

International Academy of the Visual Arts

ABOUT THE NEWS SOURCE:
Bob Taylor

LEGAL NOTICE AND TERMS OF USE: The content of the above press release was provided by the “news source” Bob Taylor or authorized agency, who is solely responsible for its accuracy. Send2Press® is the originating wire service for this story and content is Copr. © Bob Taylor with newswire version Copr. © 2011 Send2Press (a service of Neotrope). All trademarks acknowledged. Information is believed accurate, as provided by news source or authorized agency, however is not guaranteed, and you assume all risk for use of any information found herein/hereupon.