"Daly is the ideal partner for Rock Bottom Golf! He's a down-to-earth guy and we've carved out a niche in the industry for make golfing fun and affordable for the average Joe," Tom Rath, president Rock Bottom Golf says. "It's a great match and we think he will help to bring golf to an even wider audience."

Over the years, RockBottomGolf.com has grown into one of the Internet’s largest golf retailers. They bring the best deals in the industry to cost conscience golfers from all over the globe. Loyal customers known as “Rock Heads,” typically don’t fit into the country club mold, that’s why Daly is such a great match. He’s never quite fit the country club mold either and he has never been afraid to be himself on or off the course. He’s highly relatable to the average golfer.

“Daly is the ideal partner for Rock Bottom Golf! He’s a down-to-earth guy and we’ve carved out a niche in the industry for make golfing fun and affordable for the average Joe,” Tom Rath, president Rock Bottom Golf says. “It’s a great match and we think he will help to bring golf to an even wider audience.”

With two major wins under his belt – the PGA Championship and the British Open – Daly is mostly known for his driving distance off the tee, earning him the nickname “Long John.” He’s also garnered attention for his free-wheeling attitude and involvement with numerous charitable organizations such as St. Jude Children’s Research Hospital.

For information about John Daly: http://johndaly.com/.

About TGIB Marketing, Inc.:
TGIB Marketing, Inc. is the parent company for RockBottomGolf.com and is included in the Internet Retailer Top 500 Guide. Headquartered in Rochester, N.Y. with its distribution center located in Suffolk, Va., RockBottomGolf.com is one of the largest Internet golf sites in the world specializing in closeout golf merchandise. It also offers a wide variety of name brand golf merchandise including: Callaway, Mizuno, Adams, Wilson, Taylor Made, Nike, Cleveland, Ogio and more.

Rock Bottom Golf prides itself on bringing rock bottom prices to its customers. Founded in 2000 by Tom Rath and Shannon Smith, the Rock Bottom Golf team uses their education and past work experience in technology, engineering, and finance to make their systems and processes as efficient as possible.

About John Daly:
Golfer John Daly turned pro in 1987, and he earned his first pro victory soon after at the 1987 Missouri Open. He joined the PGA TOUR in 1991, and won the PGA Championship that same year. He won the British Open in 1995 and the Buick Invitational in 2004, and earned the PGA TOUR Comeback Player of the Year distinction that year. 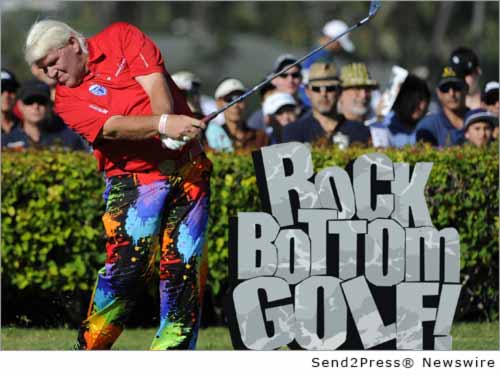 NEWS ARCHIVE NOTE: this archival news content, issued by the news source via Send2Press Newswire, was originally located in the Send2Press® 2004-2015 2.0 news platform and has been permanently converted/moved (and redirected) into our 3.0 platform. Also note the story “reads” counter (bottom of page) does not include any data prior to Oct. 30, 2016. This press release was originally published/issued: Mon, 20 Oct 2014 07:00:03 +0000

View More Advertising and Marketing News
"Daly is the ideal partner for Rock Bottom Golf! He's a down-to-earth guy and we've carved out a niche in the industry for make golfing fun and affordable for the average Joe," Tom Rath, president Rock Bottom Golf says. "It's a great match and we think he will help to bring golf to an even wider audience."

LEGAL NOTICE AND TERMS OF USE: The content of the above press release was provided by the “news source” TGIB Marketing Inc. or authorized agency, who is solely responsible for its accuracy. Send2Press® is the originating wire service for this story and content is Copr. © TGIB Marketing Inc. with newswire version Copr. © 2014 Send2Press (a service of Neotrope). All trademarks acknowledged. Information is believed accurate, as provided by news source or authorized agency, however is not guaranteed, and you assume all risk for use of any information found herein/hereupon.