CEO and President, D. Thomas Emlinger states, "The Auto-HummBuster technology is extremely effective, eliminating unwanted ground-loop noise in almost every case. When school CTO's who deal with classroom audio systems actually get a chance to hear a demonstration, they are blown away by how well it works."

DALLAS, Texas, June 16, 2015 (SEND2PRESS NEWSWIRE) — Roemtech®, LLC is announcing the award of Patent #9,042,577 by the USPTO for its invention of a unique circuitry that automatically analyzes multiple audio inputs and checks for ground-loop noise that frequently plagues classroom audio systems. If the circuitry detects ground-loop noise on any input, it will immediately take action to eliminate that noise by automatically engaging internal ground-loop isolation transformers.

It is the first time that an amplifier can diagnose a ground-loop issue, detect which input is the problem and then fix it with a single push of a button. Once the microprocessor makes the proper settings, it stores them in memory so that even during a power outage, the settings can be recalled upon power-up. Roemtech markets this technology under the trademarked name Auto-HummBuster®.

The Auto-HummBuster technology is the culmination of eight years of research and development by Roemtech’s engineering department. According to Roemtech, ground-loop noise is a common audio problem, especially in classroom audio systems. By working with end users and commercial dealers, Roemtech set out to find a solution that would make getting rid of audio noise much quicker and easier. Up until now, fixing ground-loop noise required that an experienced technician drive out to the customer, sometimes many miles away.

Once there, he had to diagnose the system and then put in ground-loop filters where necessary or meet with a certified electrician and make fixes to the existing 110V electrical wiring. Typically these service calls were time consuming and expensive. With Roemtech’s new Auto-HummBuster technology, the end user can simply push the Auto-HummBuster button once and fix the problem himself.

CEO and President, D. Thomas Emlinger states, “The Auto-HummBuster technology is extremely effective, eliminating unwanted ground-loop noise in almost every case. When school CTO’s who deal with classroom audio systems actually get a chance to hear a demonstration, they are blown away by how well it works. If you hear humming in an audio system, they aren’t using an amplifier with Auto-HummBuster technology.”

The PMA-350H classroom amplifier is the first amplifier to feature the patented Auto-Hummbuster technology and is currently available through authorized Roemtech audio-visual dealers only. It features three line level inputs, all of which are protected by the Auto-HummBuster technology. In addition to this, Roemtech says they have future amplifiers in development that will feature this technology.

About Roemtech, LLC:
The audio company is privately owned by D. Thomas Emlinger. He and his associates have spent nearly 10 years researching, developing and testing the PlenumAmp line. They currently have tens of thousands of units successfully installed in classrooms and conference rooms around the world with future products under development. 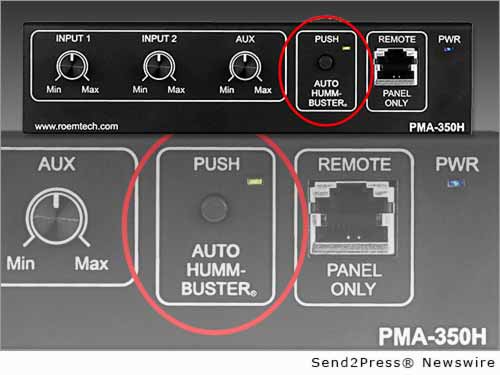 NEWS ARCHIVE NOTE: this archival news content, issued by the news source via Send2Press Newswire, was originally located in the Send2Press® 2004-2015 2.0 news platform and has been permanently converted/moved (and redirected) into our 3.0 platform. Also note the story “reads” counter (bottom of page) does not include any data prior to Oct. 30, 2016. This press release was originally published/issued: Tue, 16 Jun 2015 11:01:30 +0000

View More Audio Visual Technology News
CEO and President, D. Thomas Emlinger states, "The Auto-HummBuster technology is extremely effective, eliminating unwanted ground-loop noise in almost every case. When school CTO's who deal with classroom audio systems actually get a chance to hear a demonstration, they are blown away by how well it works."

ABOUT THE NEWS SOURCE:
Roemtech, LLC

LEGAL NOTICE AND TERMS OF USE: The content of the above press release was provided by the “news source” Roemtech, LLC or authorized agency, who is solely responsible for its accuracy. Send2Press® is the originating wire service for this story and content is Copr. © Roemtech, LLC with newswire version Copr. © 2015 Send2Press (a service of Neotrope). All trademarks acknowledged. Information is believed accurate, as provided by news source or authorized agency, however is not guaranteed, and you assume all risk for use of any information found herein/hereupon.