The attractive box is decorated with rustic artwork featuring an ancient still and stylized agave, with the top of the box showing the agave plants for each of the four varietals.

Scorpion Mezcal’s® award winning sampler gift box contains four 200ml bottles of Scorpion Mezcal® Silver. Each of the four bottles contains a different variety of 100 percent de agave Mezcal so that the consumer can experience, appreciate and become familiar with each of the varietals’ unique flavor.

Suggested retail for the 800ml box is $80; alc/vol 40 percent; each bottle is a different 100 percent agave varietal.

Imported by Caballeros Inc., Oakton, Va., leading importers of award winning 100 percent agave Mezcals. Produced and distilled by Scorpion Mezcal SA de CV Oaxaca, Mexico. In 2015, master distiller, Douglas K. French is celebrating his 20th anniversary as an agave/maguey grower in Oaxaca. He planted his first espadin agave crop in 1995 with 2500 agaves/magueys on his ranch in San Felipe del Agua, Oaxaca. Since then he has planted maguey every single year and has about 50 acres of maguey plantations. 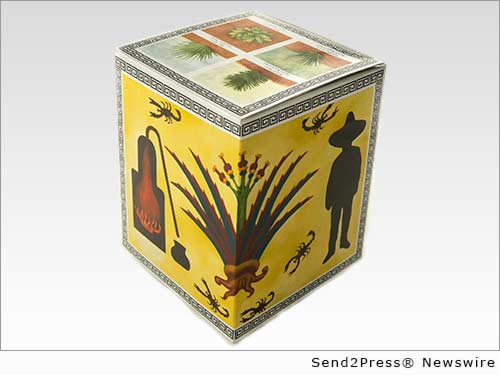 NEWS ARCHIVE NOTE: this archival news content, issued by the news source via Send2Press Newswire, was originally located in the Send2Press® 2004-2015 2.0 news platform and has been permanently converted/moved (and redirected) into our 3.0 platform. Also note the story “reads” counter (bottom of page) does not include any data prior to Oct. 30, 2016. This press release was originally published/issued: Tue, 17 Feb 2015 07:00:02 +0000

ABOUT THE NEWS SOURCE:
Caballeros Inc.

LEGAL NOTICE AND TERMS OF USE: The content of the above press release was provided by the “news source” Caballeros Inc. or authorized agency, who is solely responsible for its accuracy. Send2Press® is the originating wire service for this story and content is Copr. © Caballeros Inc. with newswire version Copr. © 2015 Send2Press (a service of Neotrope). All trademarks acknowledged. Information is believed accurate, as provided by news source or authorized agency, however is not guaranteed, and you assume all risk for use of any information found herein/hereupon.