"My one goal in life is to teach others to believe and to achieve success by sharing my personal experiences, and unique methods and strategies to obtain higher success," says Wayne Wicka. "I steadfastly believe that everyone has within them The Power of Human Potential."

WINONA, Minn., Jan. 29, 2015 (SEND2PRESS NEWSWIRE) — Wayne Wicka went into the U.S. Marine Corps seeking direction, leadership and success, and he got it. The techniques learned from the New England Patriots and from his then defensive coach at the New York Jets, Pete Carroll, now the Head Coach of the Seattle Seahawks, created life-changing memories for Wicka, a high school benchwarmer turned New York Jet and U.S. Marine who sacked Brett Favre.

Wicka takes the principles learned from the United States Marine Corps, the National Football League, his collegiate coaching and teaching experiences and shared it with the young and inexperienced Arcadia High School Raiders, who immediately went on to unprecedented success, two consecutive undefeated back-to-back Coulee Conference Championship seasons, finishing the 2013 and 2014 regular seasons a perfect 18-0.

His book, “The Power of Human Potential: It’s In You!” is now available.

“My one goal in life is to teach others to believe and to achieve success by sharing my personal experiences, and unique methods and strategies to obtain higher success,” says Wicka. “I steadfastly believe that everyone has within them The Power of Human Potential.”

The abbreviated version of the book’s summary follows, but the complete summary can be seen at http://www.waynewicka.com/ or http://www.thepowerofhumanpotential.com/.

The true story of Wayne Wicka’s life, a Horatio Alger-like rags-to-riches tale, a life that begins in Smalltown, USA, Dodge, Wisconsin (population 300), a journey including stops in Magnificent MCRD the Show Place of the Marine Corps, Beverly Hills, Hollywood, the metropolis of New York City (19 million), and the National Football League (NFL) as a New York Jet. A fascinating story of struggle and triumph in his quest to overcome failure and discover success.

Using the Marine Corps’ leadership principles for success – self-discipline, hard work, dedication, determination, and perseverance to a goal – Wicka emerges from the Marine Corps to retrace his steps, confront his painful past, for a second chance “do over” of his past academic and athletic failures. This is a journey of Academic and Athletic Redemption, culminating in Final Redemption.

Wicka faces an uphill battle and difficult odds as a first-generation, non-traditional college student, because neither of his parents had a college degree. Using the power of positive thinking and the mentoring he received along the way from coaches, college professors, the U.S. Marine Corps, the National Football League, as well as many people who foretold his success, inspiration from NFL Stars Howie Long, Herman Edwards, and Head Coach Pete Carroll of the Seattle Seahawks, his belief in self grows. Unleashed is his self-confidence and his renewed commitment takes him on an incredible journey of Academic and Athletic Redemption.

A story of adversity, triumph, and never giving up, the journey takes you from Small Town, USA to the metropolis of New York City, through his turbulent teen years and parents’ marital heartache, the Marine Corps, college life, the NFL, and the obstacles of life. In the wake, Wayne re-emerges and leaves his indelible mark in both academics and athletics.

This story is hilariously funny, but, at times, emotionally heartbreaking. This autobiography and self-help book serves as a source of motivation and provides life lessons to help other people achieve their highest hopes and dreams.

View a sneak preview of “The Power of Human Potential: It’s In You,” in a thought-provoking, short slide show, at: http://www.waynewicka.com/ or http://www.thepowerofhumanpotential.com/ at the bottom of the homepage. 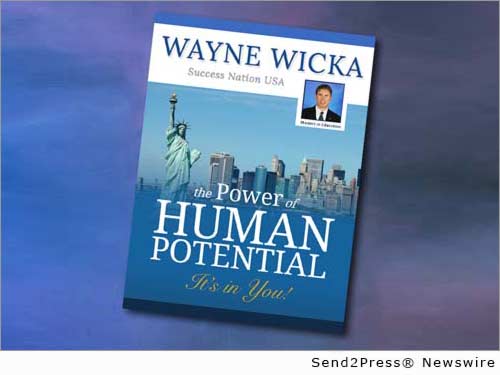 NEWS ARCHIVE NOTE: this archival news content, issued by the news source via Send2Press Newswire, was originally located in the Send2Press® 2004-2015 2.0 news platform and has been permanently converted/moved (and redirected) into our 3.0 platform. Also note the story “reads” counter (bottom of page) does not include any data prior to Oct. 30, 2016. This press release was originally published/issued: Thu, 29 Jan 2015 17:43:27 +0000

View More Books and Publishing News
"My one goal in life is to teach others to believe and to achieve success by sharing my personal experiences, and unique methods and strategies to obtain higher success," says Wayne Wicka. "I steadfastly believe that everyone has within them The Power of Human Potential."

ABOUT THE NEWS SOURCE:
Wayne Wicka

LEGAL NOTICE AND TERMS OF USE: The content of the above press release was provided by the “news source” Wayne Wicka or authorized agency, who is solely responsible for its accuracy. Send2Press® is the originating wire service for this story and content is Copr. © Wayne Wicka with newswire version Copr. © 2015 Send2Press (a service of Neotrope). All trademarks acknowledged. Information is believed accurate, as provided by news source or authorized agency, however is not guaranteed, and you assume all risk for use of any information found herein/hereupon.