"We're always excited to be a part of the LAMN Jams," says Christopher Simmons, CEO of Neotrope(R), and a member of ASCAP and PRSA. "These are exceptional opportunities for rising stars to gain exposure and get usable feedback on their talent from respected industry pros."

The Los Angeles Music Network’s “LAMN Jams” are back. Launched in 2005, LAMN Jams go beyond traditional showcases by featuring artists performing original songs, followed by instant critiques from a panel of industry experts. LAMN Jams emphasize creativity and originality, featuring music written by artists themselves (no covers). Past winners include Aloe Blacc, The Mowglis and Grammy® award-winning songwriter Tim Fagan.

“We’re always excited to be a part of the LAMN Jams,” says Christopher Simmons, CEO of Neotrope®, and a member of ASCAP and PRSA. “These are exceptional opportunities for rising stars to gain exposure and get usable feedback on their talent from respected industry pros.”

“Of all the press release services we have tried over the years, Send2Press has proven to be the most effective,” says LAMN President Tess Taylor, “and we are thrilled to have them on board again for 2014 to help market our event and, more importantly, to help the winning artists of our contest raise visibility to both traditional and social media.”

You are invited to attend the LAMN Jam Pop/Rock Preliminary Music Contest #1:

Admission to attend the preliminary rounds (URBAN and ROCK) is free, but please RSVP on the LAMN website. You may also RSVP by calling 818-769-6095.

This year, artists compete for a Career Launch Package valued at almost $40,000. Artists and their performances are evaluated by our panel of industry experts, and the top 3 artists advance to the Semi-Finale to compete for the Grand Prize Package.

LAMN Jam Music Contests are open to the public (21+).

COST:
FREE to attend, but please RSVP. (21+). No admission without RSVP.

LAMN invites all pop/rock and urban artists to submit original music to perform for a panel of top industry experts and receive instant live critiques, and compete for almost $40,000+ in prizes and priceless exposure opportunities. These include gear, professional services, first-look recording, distribution and music publishing deals, as well as first-look consideration to take a slot on the Epic Proportions Tours.

Past winners include Aloe Blacc, The Mowglis and Grammy® award-winning songwriter Tim Fagan.

Almost $40,000 in prizes plus priceless exposure opportunities! Get the full scoop at: http://www.lamn.com/?page_id=1944.

The Los Angeles Music Network (LAMN), now in its 26th year, promotes career advancement, education and good will among artists and creatives. We sponsor industry gatherings, workshops, private dinners and seminars with top executives; publish bulletins which feature interviews and business coverage of the music industry; and provide professional development opportunities and career services, such as job listings and a Mentor Network, to our members. LAMN has grown to include members from around the nation and the world.

Send2Press® (www.Send2Press.com) is a leading online-based newswire service launched in 2000, providing Direct-to-Editors™ targeted news distribution, professional press release writing, along with measurable social media marketing with every project. The service is offered by Neotrope®, a 31-year old entertainment, PR, and brand-identity company, based in Torrance, Calif. Neotrope was an Inc. 5000 listed company in 2009, is a member of GS1, is listed with the RIAA to generate ISRC codes, and has an A+ Rating with the BBB. The service is unique due to its core staff consisting of working journalists, musicians, and accredited PR professionals. As a sponsor of 2014 LAMN Jam Music Contests, Send2Press will provide professional press release services to the winners (to include media dissemination, SEO, hand submission to social networks, and more) and support marketing for the LAMN Jam series. Additionally, all LAMN members receive 10% off most Send2Press services. 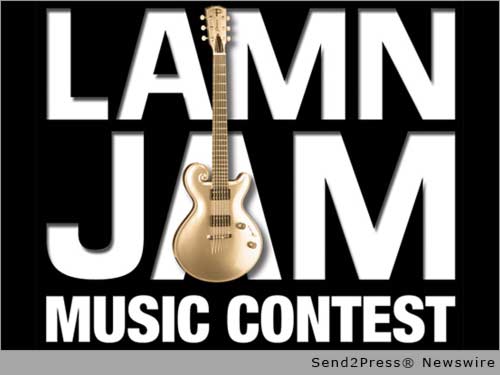 NEWS ARCHIVE NOTE: this archival news content, issued by the news source via Send2Press Newswire, was originally located in the Send2Press® 2004-2015 2.0 news platform and has been permanently converted/moved (and redirected) into our 3.0 platform. Also note the story “reads” counter (bottom of page) does not include any data prior to Oct. 30, 2016. This press release was originally published/issued: Fri, 18 Apr 2014 13:22:37 +0000

View More Advertising and Marketing News
"We're always excited to be a part of the LAMN Jams," says Christopher Simmons, CEO of Neotrope(R), and a member of ASCAP and PRSA. "These are exceptional opportunities for rising stars to gain exposure and get usable feedback on their talent from respected industry pros."