Compton is the author of the collection “The Same Terrible Storm” (Foxhead Books, 2012), a 2013 nominee for the Chaffin Award in Appalachian Writing. His work has also been nominated for the Pushcart Prize, the Still: Journal Award and the Gertrude Stein Fiction Award.

With “Where Alligators Sleep,” Compton offers us another stunning collection of short fiction at its best — piquant, compelling, and profound. The collection’s dozens of stories (66, to be precise) bring readers fraught, masterfully crafted tales, seasoned with the good news of destiny, redemption, and catharsis.

In a recent interview with Steph Post, editor of Pandamoon Publishing, Compton said that his latest collection of flash fiction began almost as joke between himself and another author.

“I started writing these really short stories [around 2008] to entertain a writer friend of mine and he did the same [for me]. We would send them back and forth just to entertain each other that way. But at some point… we started noticing a lot of these ‘flash’ pieces were being accepted at a lot of journals we’d never heard of. We sent a few out and were rejected… We decided to have a competition to see who could accumulate the most rejections over the course of a couple months. For the first month, I won hands down.”

But eventually, Compton’s work was accepted by numerous fiction journals and he lost the competition, though his gritty, visceral style won him a place in the pagoda of emerging Appalachian authors.

He speaks frankly of the wistful story which lends the book it’s title, which gives readers a glimpse into the room of an old couple dying in separate beds:

“It was a sad situation to me, but one they would overcome each night by meeting in the middle of the room and dancing and being in love and enjoying that moment. I really liked that idea, and I liked that to everyone else they were these dried up and wrinkled sort of modern-day dinosaurs, but to each other they were all the beauty the universe could ever pour out onto the world. The story did stand out for me and I realized I was really trying to write about that in one way or another in each of the stories.”

Sam Slaughter, of the online literary journal Atticus Review, praised the collection, saying, “With so many strong emotional moments one after another, Alligators can be thought of as rumble strip fiction where seemingly every moment is a new bump, a new jarring experience to contend with in an effort to get to wherever you’re going. After riding those bumps for a while, though, you are almost lulled by them…. By the time you get to the end, you just want to keep riding for the feeling it gives you.”

Sheldon Lee Compton lives in Eastern Kentucky. His work has appeared in numerous journals and been nominated for several awards, as well as anthologized on many occasions. He is a past founder and editor of three literary journals, including Revolution John. For more information on his work, visit his blog at http://bentcountry.blogspot.com/. 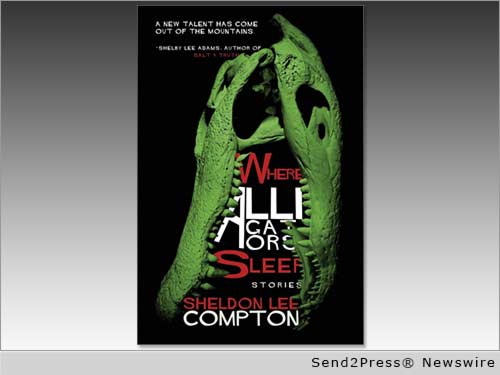 NEWS ARCHIVE NOTE: this archival news content, issued by the news source via Send2Press Newswire, was originally located in the Send2Press® 2004-2015 2.0 news platform and has been permanently converted/moved (and redirected) into our 3.0 platform. Also note the story “reads” counter (bottom of page) does not include any data prior to Oct. 30, 2016. This press release was originally published/issued: Fri, 26 Sep 2014 06:01:03 +0000