"We never know what to expect from winter in Massachusetts," says Mark Chapman, Director at Prophett-Chapman, Cole & Gleason, "but we know how bad it can get. Imagine dealing with all that if you or your children don't have a decent winter coat."

BRIDGEWATER, Mass., Nov. 23, 2015 (SEND2PRESS NEWSWIRE) — Family-owned Chapman, Cole and Gleason Funeral Homes has announced their fourth annual Winter Coat Drive for those in need. And if you were living in Massachusetts last winter, you remember not only how the snow kept coming and coming, but that it was so cold for so long that it didn’t melt for months.

“We never know what to expect from winter in Massachusetts,” says Mark Chapman, Director at Prophett-Chapman, Cole & Gleason Funeral Homes in Bridgewater and East Bridgewater, “but we know how bad it can get. Imagine dealing with all that if you or your children don’t have a decent winter coat.”

That’s what the 150-year-old, family-owned Chapman, Cole & Gleason group of funeral homes had in mind when they first launched their annual Coat Drive. “Massachusetts families have been very good to us over the decades,” said Chapman, “so we want to do what we can to help those less fortunate than us with the Coat Drive.”

Now through the end of 2015, all eight locations of Chapman, Cole & Gleason Funeral Homes are collecting old winter coats — or new ones, if you want to donate those — which will then be sorted, cleaned, and distributed through their non-profit donation partners to local families and individuals, including the homeless.

You can donate a winter coat at a Chapman, Cole & Gleason location in Bridgewater, East Bridgewater, Falmouth, West Falmouth, Marstons Mills, Mashpee, Martha’s Vineyard, and Wareham. For directions to the location nearest you, go to http://www.ccgfuneralhome.com/. 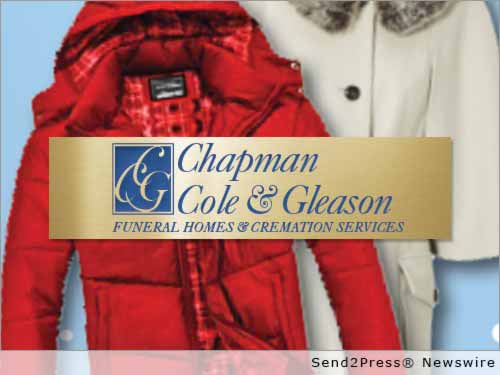 NEWS ARCHIVE NOTE: this archival news content, issued by the news source via Send2Press Newswire, was originally located in the Send2Press® 2004-2015 2.0 news platform and has been permanently converted/moved (and redirected) into our 3.0 platform. Also note the story “reads” counter (bottom of page) does not include any data prior to Oct. 30, 2016. This press release was originally published/issued: Mon, 23 Nov 2015 14:54:00 +0000

View More Corporate Social Responsibility News
"We never know what to expect from winter in Massachusetts," says Mark Chapman, Director at Prophett-Chapman, Cole & Gleason, "but we know how bad it can get. Imagine dealing with all that if you or your children don't have a decent winter coat."

More from Chapman, Cole and Gleason

ABOUT THE NEWS SOURCE:
Chapman, Cole and Gleason

LEGAL NOTICE AND TERMS OF USE: The content of the above press release was provided by the “news source” Chapman, Cole and Gleason or authorized agency, who is solely responsible for its accuracy. Send2Press® is the originating wire service for this story and content is Copr. © Chapman, Cole and Gleason with newswire version Copr. © 2015 Send2Press (a service of Neotrope). All trademarks acknowledged. Information is believed accurate, as provided by news source or authorized agency, however is not guaranteed, and you assume all risk for use of any information found herein/hereupon.