"Our Bourbon is aged 2 years in 15 gallon barrels for a faster maturation process," says James Bagford, one of the three owner/distillers at Stillwrights.

Stillwrights Straight Bourbon Whiskey, an Ohio Bourbon, was awarded a Gold Medal at the event. The competition consisted of 155 of the country’s truly hand crafted whiskeys. Stillwrights is proud to be one of only a handful of fine Ohio made Bourbons. This is the second national award for the young Bourbon, having been awarded a bronze medal at the San Diego International Spirits Competition in 2014.

“Our Bourbon is aged 2 years in 15 gallon barrels for a faster maturation process,” says James Bagford, one of the three owner/distillers at Stillwrights.

Stillwrights Bourbon is a wheated bourbon, with no rye in the mash bill. The combination of the dark charred, smaller barrels and the wheated mash bill, give it a truly unique character.

“David Pickrell, former head distiller at Makers Mark, being a co-chair of the judging committee, makes this gold medal something very special for us,” Brad Measel of Stillwrights commented.

Shawn Measel adds, “Our commitment to attention to detail and craftsmanship is paying off.” 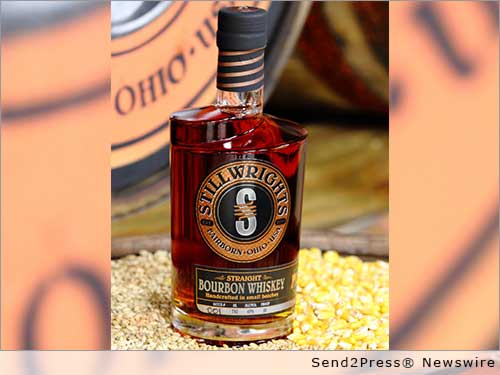 NEWS ARCHIVE NOTE: this archival news content, issued by the news source via Send2Press Newswire, was originally located in the Send2Press® 2004-2015 2.0 news platform and has been permanently converted/moved (and redirected) into our 3.0 platform. Also note the story “reads” counter (bottom of page) does not include any data prior to Oct. 30, 2016. This press release was originally published/issued: Tue, 24 Feb 2015 07:00:03 +0000

View More Awards and Honors News
"Our Bourbon is aged 2 years in 15 gallon barrels for a faster maturation process," says James Bagford, one of the three owner/distillers at Stillwrights.

LEGAL NOTICE AND TERMS OF USE: The content of the above press release was provided by the “news source” Flat Rock Spirits LLC or authorized agency, who is solely responsible for its accuracy. Send2Press® is the originating wire service for this story and content is Copr. © Flat Rock Spirits LLC with newswire version Copr. © 2015 Send2Press (a service of Neotrope). All trademarks acknowledged. Information is believed accurate, as provided by news source or authorized agency, however is not guaranteed, and you assume all risk for use of any information found herein/hereupon.