"Rappers used to come to my office all the time, and I must admit, I loved it," Goldwater says. "We became like a family."

SuperFly was the result of Gloria’s passion for rhythm and blues which evolved into a love affair with hip-hop. Her connections and relationships formed during her marriage to John Goldwater, creator of Archie Comics, were what ultimately provided her with the resources to publish this hip-hop legend.

A 294-page book, “SuperFly: My Untold Story of Hip-Hop,” details Gloria’s rise to publishing success, and also reveals the heartbreaking situation that led to the magazine’s shutdown, right in the midst of its popularity.

Gloria shares rare anecdotes about an industry where, at first glance, she appeared out of her element. She gives readers candid accounts about the hip-hop music scene as well as personal insight into her various relationships with the artists.

Readers will revel in never-before-published photos taken at exclusive events with celebrities such as Queen Latifah, LL Cool J, Ice T, MC Hammer, Dr. Dre, and many others.

Many of these hip-hop artists became fast friends with Gloria and they forged meaningful and lasting friendships. Rhythm and blues artists such as Bobby Brown, Mariah Carey and Janet Jackson also graced the pages of SuperFly magazine. The book chronicles it all.

“SuperFly – My Untold Story of Hip-Hop” begins with an overview of the evolution of hip-hop from society’s fringe into the mainstream. It then goes on to describe the development and subsequent launch of SuperFly, the celebrity-drenched SuperFly years, and the post-SuperFly life.

“Rappers used to come to my office all the time, and I must admit, I loved it,” Goldwater says. “We became like a family.”

About the Author:
A native New Yorker, today Gloria lives in Los Angeles with her husband, Lew Weintraub. Music and dance have always been a part of her life and will continue to be. 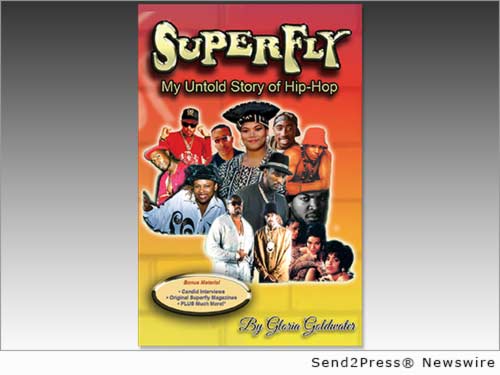 NEWS ARCHIVE NOTE: this archival news content, issued by the news source via Send2Press Newswire, was originally located in the Send2Press® 2004-2015 2.0 news platform and has been permanently converted/moved (and redirected) into our 3.0 platform. Also note the story “reads” counter (bottom of page) does not include any data prior to Oct. 30, 2016. This press release was originally published/issued: Wed, 29 Oct 2014 06:00:34 +0000

View More African American Interest News
"Rappers used to come to my office all the time, and I must admit, I loved it," Goldwater says. "We became like a family."

ABOUT THE NEWS SOURCE:
Gloria Goldwater

LEGAL NOTICE AND TERMS OF USE: The content of the above press release was provided by the “news source” Gloria Goldwater or authorized agency, who is solely responsible for its accuracy. Send2Press® is the originating wire service for this story and content is Copr. © Gloria Goldwater with newswire version Copr. © 2014 Send2Press (a service of Neotrope). All trademarks acknowledged. Information is believed accurate, as provided by news source or authorized agency, however is not guaranteed, and you assume all risk for use of any information found herein/hereupon.