Send2Press › Wire › Entertainment › Books and Publishing › SuperSikh and The Atma Defenders – A Multiracial Team of Superheroes Fighting for Justice!

SuperSikh and The Atma Defenders – A Multiracial Team of Superheroes Fighting for Justice!

"I am thrilled to bring a multiracial superhero team to fruition. We are excited to hear from the fans on social media," says Jai Nitz, award winning writer of the "Green Hornet," and Chairman of Super Sikh Comics LLC Advisory Board.

CHICAGO, Ill., May 1, 2015 (SEND2PRESS NEWSWIRE) — Super Sikh Comics LLC commenced production of issue #1 of their comic book series after successfully launching Issue #0 at C2E2, Chicago. With over 1,200 copies of Issue #0 sold in a single weekend, the immediate success of “SuperSikh” exceeded all expectations.

A multiracial team of superheroes who activate their superpowers according to their chakras with yoga and meditation, greatly resonated amongst even the youngest fans. In the beginning, Co-Creators Ravi Singh and Amar Dev Khalsa (who is just 15 years old) had a vision to create a comic book about superheroes that children from all ethnic backgrounds within American communities can identify with. The goal was to promote equality and diversity through the means of art.

Over several drafts, artist and owner of Super Sikh Comics LLC, Erik Carillo, developed the design of the main character “SuperSikh” along with his 7 friends, “The Atma Defenders.” Supersikh is sporting a beard and wearing a turban, while working as computer specialist in a modern American society. The antagonist of the story line is not merely a person or evil organization, but “Death” and “The 5 Thieves..”

Jai Nitz, award winning writer of the “Green Hornet,” has agreed to serve as Chairman of Super Sikh Comics LLC Advisory Board: “I am thrilled to bring a multiracial superhero team to fruition. We are excited to hear from the fans on social media.”

Combining science fiction with meditation and spirituality, this comic book is a new unique approach to the genre and bares personal significance to its creators: “Why are the guys that are wearing turbans always the bad guys?” Ravi Singh used to ask his mother when watching Saturday morning cartoons as a child. His mother’s response was, “Go ahead and create your own Superhero.”

Issue #1 is in production and planned to be released in multiple languages in mid 2015. 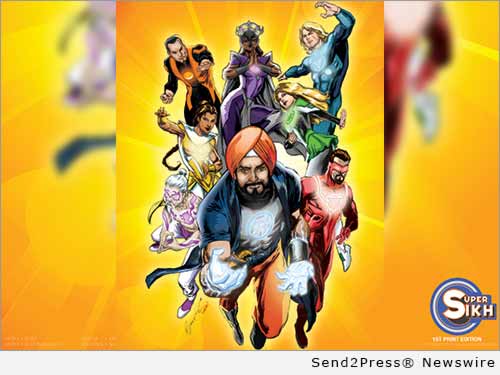 NEWS ARCHIVE NOTE: this archival news content, issued by the news source via Send2Press Newswire, was originally located in the Send2Press® 2004-2015 2.0 news platform and has been permanently converted/moved (and redirected) into our 3.0 platform. Also note the story “reads” counter (bottom of page) does not include any data prior to Oct. 30, 2016. This press release was originally published/issued: Fri, 01 May 2015 15:51:30 +0000

View More Books and Publishing News
"I am thrilled to bring a multiracial superhero team to fruition. We are excited to hear from the fans on social media," says Jai Nitz, award winning writer of the "Green Hornet," and Chairman of Super Sikh Comics LLC Advisory Board.

LEGAL NOTICE AND TERMS OF USE: The content of the above press release was provided by the “news source” Super Sikh Comics LLC or authorized agency, who is solely responsible for its accuracy. Send2Press® is the originating wire service for this story and content is Copr. © Super Sikh Comics LLC with newswire version Copr. © 2015 Send2Press (a service of Neotrope). All trademarks acknowledged. Information is believed accurate, as provided by news source or authorized agency, however is not guaranteed, and you assume all risk for use of any information found herein/hereupon.