"Elevation Church is organized and innovative," Syntax CEO Timothy Trudeau said. "It's rare to see that much vision combined with that much execution. I am looking forward to helping them fulfill their mission."

SAN DIEGO, Calif., April 21, 2016 (SEND2PRESS NEWSWIRE) — Syntax Creative is pleased to announce a new deal with Elevation Church, which Outreach Magazine named in 2015 the 15th largest church in America. Pastored by Steven Furtick, the multi-site church with 20,000 weekly attendees calls over a dozen locations home, including its base in Matthews, North Carolina. Elevation Church will release its second Kids Worship album, “One In a Million,” worldwide on April 29, which is available for pre-order now at iTunes, Amazon and Google Play.

“I’m really excited about the release of our second Kids album,” Furtick said. “Our teams have done an amazing job putting this project together and I believe ‘One In a Million’ is an album of worship that will have the whole family singing together!”

“We want to leverage digital media as much as we can to share the Gospel,” Elevation Family Pastor Frank Bealer said. “Elevation Church has become known for powerful worship experiences and a kids ministry that ‘Engages Kids & Empowers Family,’ and we will continue to press on to embody those attributes.”

“Elevation Church is organized and innovative,” Syntax CEO Timothy Trudeau said. “It’s rare to see that much vision combined with that much execution. I am looking forward to helping them fulfill their mission.”

“I’ve been looking for a way to partner with Syntax Creative,” Bealer said. “I believe that they will help us improve our marketing and distribution.”

“After meeting with the staff in person, I could tell that they were exactly the kind of organization we would want to partner with,” Trudeau said. “I appreciate their work ethic, creativity and desire to create high quality art.”

About Elevation Church:
Elevation Church is a multi-site church based in Charlotte, North Carolina. It was started in Feb. 2006 by eight families under the leadership of Pastor Steven Furtick. Over the past 10 years it has grown to over a dozen locations and 20,000 in weekend attendance, including over 4.000 in the Children’s ministry. To learn more, visit: http://elevationchurch.org/. 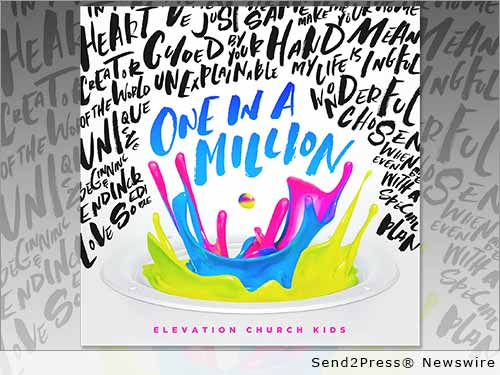 Alternate Headline: The Elevation Church Kids Are Set To Release Their Sophomore LP, ‘One In a Million’

NEWS ARCHIVE NOTE: this archival news content, issued by the news source via Send2Press Newswire, was originally located in the Send2Press® 2004-2015 2.0 news platform and has been permanently converted/moved (and redirected) into our 3.0 platform. Also note the story “reads” counter (bottom of page) does not include any data prior to Oct. 30, 2016. This press release was originally published/issued: Thu, 21 Apr 2016 15:04:48 +0000

View More Advertising and Marketing News
"Elevation Church is organized and innovative," Syntax CEO Timothy Trudeau said. "It's rare to see that much vision combined with that much execution. I am looking forward to helping them fulfill their mission."

ABOUT THE NEWS SOURCE:
Syntax Creative

LEGAL NOTICE AND TERMS OF USE: The content of the above press release was provided by the “news source” Syntax Creative or authorized agency, who is solely responsible for its accuracy. Send2Press® is the originating wire service for this story and content is Copr. © Syntax Creative with newswire version Copr. © 2016 Send2Press (a service of Neotrope). All trademarks acknowledged. Information is believed accurate, as provided by news source or authorized agency, however is not guaranteed, and you assume all risk for use of any information found herein/hereupon.