"Isn't it way past time people made their U.S. government work for them instead of against them?" Piont asks. "If given the choice, why would someone choose debt-interest money over zero-percent money? Just think about that."

SPRINGFIELD, Ill., Feb. 17, 2016 (SEND2PRESS NEWSWIRE) — Website author and creator, Michael Piontkowski, also known as Piont, recently launched InterestFreeBanking.com to get the word out on how every U.S. citizen can convert all their debt-interest money loans into zero percent, interest-free money loans.

“What people don’t know is that their U.S. citizenship constitutionally qualifies them for interest-free money,” Piont says. “They can save hundreds of thousands of dollars by not having to pay interest on home mortgages, auto and other vehicle loans, personal and business loans, credit cards, student loans and more.”

Piont’s website reveals that U.S. citizens’ constitutional right to interest-free money was first established by President Abraham Lincoln. He also shows that the God of the Holy Bible told His people not to use debt-interest money. The God of the Holy Bible had His people using interest-free money as documented in Exodus 22:25; Deuteronomy 23:19-20; and Ezekiel 18:13.

Piont proposes that U.S. citizens can take action and take back ownership of their U.S. Government’s money printing presses by passing the Abraham Lincoln Banking Act. This will restore President Lincoln’s godly and constitutional interest-free money as the U.S. money supply. How? It’s very straight forward.

“The plan is simple,” explains Piont. “People can spread the name and news of this website over social networks and by word-of-mouth. They can also contact their U.S. congressman or congresswoman and two U.S. senators to instruct them to pass The Abraham Lincoln Banking Act.”

“Isn’t it way past time people made their U.S. government work for them instead of against them?” Piont asks. “If given the choice, why would someone choose debt-interest money over zero-percent money? Just think about that.” 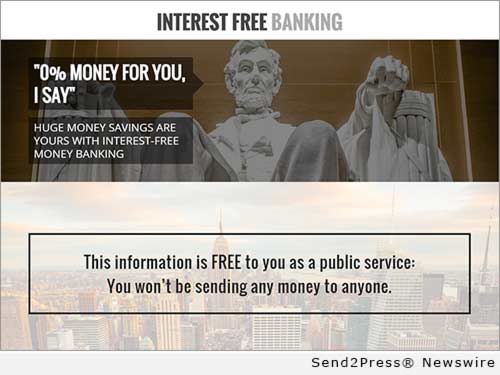 NEWS ARCHIVE NOTE: this archival news content, issued by the news source via Send2Press Newswire, was originally located in the Send2Press® 2004-2015 2.0 news platform and has been permanently converted/moved (and redirected) into our 3.0 platform. Also note the story “reads” counter (bottom of page) does not include any data prior to Oct. 30, 2016. This press release was originally published/issued: Wed, 17 Feb 2016 07:00:33 +0000

View More Banking News
"Isn't it way past time people made their U.S. government work for them instead of against them?" Piont asks. "If given the choice, why would someone choose debt-interest money over zero-percent money? Just think about that."

ABOUT THE NEWS SOURCE:
Michael Piontkowski

LEGAL NOTICE AND TERMS OF USE: The content of the above press release was provided by the “news source” Michael Piontkowski or authorized agency, who is solely responsible for its accuracy. Send2Press® is the originating wire service for this story and content is Copr. © Michael Piontkowski with newswire version Copr. © 2016 Send2Press (a service of Neotrope). All trademarks acknowledged. Information is believed accurate, as provided by news source or authorized agency, however is not guaranteed, and you assume all risk for use of any information found herein/hereupon.