"Survival at one year was significantly better in the personalized chemotherapy arm of the study," said Dr. Bosanquet. "The finding is of particular interest given that no other chemotherapy-only protocol has ever been shown to increase overall survival."

HUNTINGTON BEACH, Calif., Nov. 14, 2013 (SEND2PRESS NEWSWIRE) — SignatureCLL today announced that the first laboratory test ever shown in a clinical trial to improve one year survival rates in cancer is now available to patients with chronic lymphocytic leukemia (also called CLL). The U.S. cancer physician who invented the test and the British scientist who used it to make discoveries in leukemia will offer the test under the trade name SignatuRx™ through their own, newly-formed laboratory company.

The company’s technology, in its generic form, was shown in a 777 patient randomized clinical trial to reduce early cancer deaths among relapsed CLL patients by identifying the most promising personalized chemotherapy treatment for each patient. In the study, CLL patients were more than twice as likely to die within the first year after an initial treatment relapse if their next chemotherapy drug selections were not guided by the test.

According to test developers, the ground-breaking aspect of this clinical trial is that it is the first time any test was shown in a randomized clinical trial to reduce cancer deaths over any time period. Usually, cancer tests are judged only on the basis of accuracy – how reliably they identify a certain biological condition. Prior to this study, no cancer test was ever asked to prove that its use actually made patients live longer. A randomized clinical trial is one in which two or more groups of patients are chosen at random to receive different types of treatment.

Principles of the SignatuRx™ test were conceived by Larry Weisenthal, M.D., Ph.D., a cancer physician and researcher, while he was working at the National Cancer Institute. In a prospective, randomized clinical trial that followed CLL patients for over 10 years, Andrew Bosanquet, Ph.D. and colleagues found that CLL patients who relapsed after initial chemotherapy treatment were 2.5 times more likely to die within the first year following relapse if their chemotherapy drugs were selected without test guidance. Results of the trial, officially designated LRF CLL4, were published in the journals Lancet and Leukemia.

“Survival at one year was significantly better in the personalized chemotherapy arm of the study,” said Dr. Bosanquet. “The finding is of particular interest given that no other chemotherapy-only protocol has ever been shown to increase overall survival.” In the SignatuRx™ test, patients’ own, living cancer cells are exposed to a wide range of different chemotherapy drugs to learn which chemotherapy drug or drug combination most effectively kills each patient’s cells. Chemotherapy is then personalized for each patient by focusing on effective drugs and avoiding ineffective drugs. This is a noteworthy break from what Dr. Weisenthal calls “one size fits all” chemotherapy, still used by most cancer physicians, in which drugs are chosen on some rational basis that does not involve directly testing candidate drugs in advance against each patient’s own cancer cells.

“The problem with that approach,” said Dr. Weisenthal, “is that many drugs are available for treatment of CLL but patient responses to the drugs are hit or miss. Some patients might be helped by one drug and other patients by another but no drug ever helps all patients equally. Without testing, there is no way to know in advance which drugs are best for which patients.”

Drs. Weisenthal and Bosanquet state that the SignatuRx™ personalized chemotherapy test can be ordered by physicians for their chronic lymphocytic leukemia patients from virtually anywhere in the world. Blood samples are sent to Dr. Weisenthal and Bosanquet’s California-based laboratory by overnight courier where the cancer cells are tested for susceptibility to treatment with up to 30 different chemotherapy drugs and drug combinations. Test reports are available in 7 to 10 days.

Detailed information about the clinical trial and about SignatureCLL is available on the company’s website: http://www.signaturecll.com/.

Chronic lymphocytic leukemia is the most common form of leukemia in adults. Approximately 120,000 people in the U.S. are living with CLL and about 4,600 persons will die of the disease this year according to the American Cancer Society. 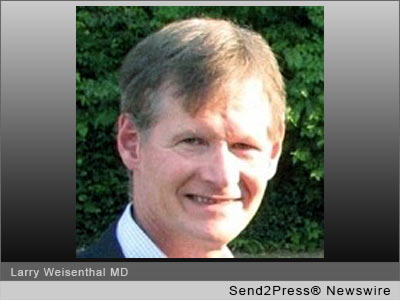 NEWS ARCHIVE NOTE: this archival news content, issued by the news source via Send2Press Newswire, was originally located in the Send2Press® 2004-2015 2.0 news platform and has been permanently converted/moved (and redirected) into our 3.0 platform. Also note the story “reads” counter (bottom of page) does not include any data prior to Oct. 30, 2016. This press release was originally published/issued: Thu, 14 Nov 2013 13:23:33 +0000

View More Business News
"Survival at one year was significantly better in the personalized chemotherapy arm of the study," said Dr. Bosanquet. "The finding is of particular interest given that no other chemotherapy-only protocol has ever been shown to increase overall survival."

ABOUT THE NEWS SOURCE:
SignatureCLL

LEGAL NOTICE AND TERMS OF USE: The content of the above press release was provided by the “news source” SignatureCLL or authorized agency, who is solely responsible for its accuracy. Send2Press® is the originating wire service for this story and content is Copr. © SignatureCLL with newswire version Copr. © 2013 Send2Press (a service of Neotrope). All trademarks acknowledged. Information is believed accurate, as provided by news source or authorized agency, however is not guaranteed, and you assume all risk for use of any information found herein/hereupon.