LOS ANGELES, Calif., March 6, 2014 (SEND2PRESS NEWSWIRE) — Bugatta Supper Club, which has been hosting wrap parties for hit TV shows, movies, extravagant weddings and even the Academy Awards, has announced that it hosted the wrap party for the famed and hilarious CBS hit comedy, “The Crazy Ones,” starring Robin Williams and Sarah Michelle Gellar on Wednesday, March 5.

The lively and exciting wrap party celebrated the close of the successful first season and featured some of the tastiest drinks and mouthwatering food in Los Angeles. Once the screening of the season finale was over, the music kicked in and an unforgettable party ensued, which included dancing and more delectable drinks, making this wrap party one of the best Bugatta has ever seen.

Bugatta is the perfect private event venue and wedding venue in Los Angeles as it is situated right in the heart of the Melrose strip in Hollywood, making it also an ideal spot for birthday, graduation and engagement parties, baby and bridal showers, and other family get-togethers.

Over the years, Bugatta has also become famous with regards to wrap parties it has hosted. Memorable and positive wrap party nights have included events such as “So you Think You Can Dance.,” “Drunk History,” “Key & Peele,” “American Idol,” “Children’s Hospital” and most recently, “The 86th Academy Awards” wrap party event. The producers of the most famous film awards show on earth – The Oscars® – celebrated one of the most successful Academy Award evenings in living memory at Bugatta on Tuesday night, March 4, 2014.

Bugatta was established in 2003 by its current CEO, Anat Escher, who also designed the interior, giving the restaurant and bar areas scope to seamlessly transform throughout the night from a sophisticated and relaxed dining atmosphere into a lively lounge and active bar scene. With its trendy interiors, which include comfortable lounges, private bungalows, and a spacious enclosed patio, to its extensive, and carefully selected cocktail bar menu, it is no wonder LA Weekly titled Bugatta as the “Best Happy Hour Destination in Los Angeles.”

Escher runs Bugatta under the TBC Management umbrella and also owns two more restaurants, Barbarella Bar and Pizzeria Lago, which are both located in Silverlake, Calif.

For more information and to experience why Bugatta Supper Club is voted the best restaurant in Los Angeles, visit the website – http://www.bugatta.com/Restaurant-Bar-Los-Angeles.html and call to make a reservation on 323-964-9494 or book via the site. 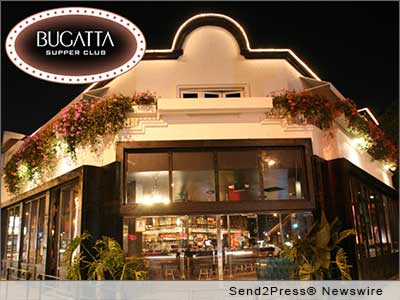 NEWS ARCHIVE NOTE: this archival news content, issued by the news source via Send2Press Newswire, was originally located in the Send2Press® 2004-2015 2.0 news platform and has been permanently converted/moved (and redirected) into our 3.0 platform. Also note the story “reads” counter (bottom of page) does not include any data prior to Oct. 30, 2016. This press release was originally published/issued: Thu, 06 Mar 2014 04:59:35 +0000

LEGAL NOTICE AND TERMS OF USE: The content of the above press release was provided by the “news source” Bugatta Supper Club or authorized agency, who is solely responsible for its accuracy. Send2Press® is the originating wire service for this story and content is Copr. © Bugatta Supper Club with newswire version Copr. © 2014 Send2Press (a service of Neotrope). All trademarks acknowledged. Information is believed accurate, as provided by news source or authorized agency, however is not guaranteed, and you assume all risk for use of any information found herein/hereupon.