The Filharmonic Swings By Twelve3south Studio

"We were getting ready to go to Austin, Texas later that day when I got a call from Sound Engineer Bryan Farina, who wanted to bring the guys up to record a few tracks," said Reis. "He asked if we had the time, and I said, 'We've always got time for artists.'"

TIPP CITY, Ohio, April 9, 2014 (SEND2PRESS NEWSWIRE) — The doors at twelve3south Studio are always open to artists who are looking to make some music, even if they stop in at a moment’s notice. The Tipp City, Ohio music studio, which is owned by producer and performer Donnie Reis, hosted The Filharmonic, of NBC’s “The Sing Off” Season 4 earlier this month when the up-and-coming a cappella group stopped in to lay down a few tracks for an upcoming EP.

The young Filipino-Americans from Southern California just happened to swing by a few hours before Reis left to play at South by Southwest with singer-songwriter Caroline Glaser.

“We were getting ready to go to Austin, Texas later that day when I got a call from Sound Engineer Bryan Farina, who wanted to bring the guys up to record a few tracks,” said Reis. “He asked if we had the time, and I said, ‘We’ve always got time for artists.'”

The Filharmonic were currently in the middle of the 31-city “The Sing-Off Tour” that included other Season 4 groups “Home Free” and “VoicePlay.” The tour had stopped in southern Ohio when the six Los Angelinos decided to pay twelve3south a visit.

“We had an off day in Cincinnati and twelve3south was only an hour away,” said Farina. “I knew Donnie was a top-notch dude, and I knew he would take care of business for these guys.”

Farina and Reis spent time touring together last year with Atlantic Records’ a cappella sensation “Straight No Chaser” (SNC). Farina was the front-of-the-house engineer for SNC, while Reis and Glaser were their opening act.

While at the studio, The Filharmonic recorded three tracks for their upcoming EP.

“We loved having the guys up at the studio,” said Reis. “They’re super-talented and a lot of fun to have around. I’m happy they took the time come visit us… even if it was at the very last minute!”

More about twelve3south and Donnie Reis:

Twelve3south is one of the professional music industry’s newest premier recording studios, owned and operated by producer, composer, songwriter, and multi-instrumentalist Donnie Reis. Check out the website at http://www.twelve3south.com/ for more info.

More about The Filharmonic:

Photo Caption: The Filharmonic is a boy band unique in their musical talent and cultural diversity. 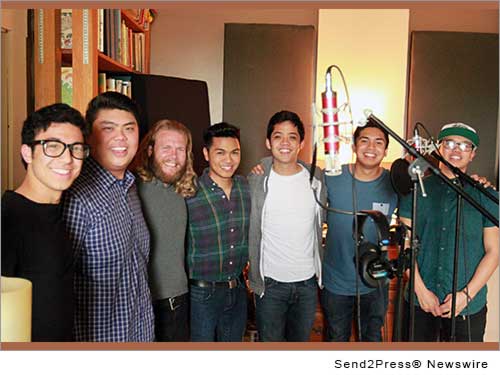 NEWS ARCHIVE NOTE: this archival news content, issued by the news source via Send2Press Newswire, was originally located in the Send2Press® 2004-2015 2.0 news platform and has been permanently converted/moved (and redirected) into our 3.0 platform. Also note the story “reads” counter (bottom of page) does not include any data prior to Oct. 30, 2016. This press release was originally published/issued: Wed, 09 Apr 2014 16:55:26 +0000

View More Business News
"We were getting ready to go to Austin, Texas later that day when I got a call from Sound Engineer Bryan Farina, who wanted to bring the guys up to record a few tracks," said Reis. "He asked if we had the time, and I said, 'We've always got time for artists.'"

LEGAL NOTICE AND TERMS OF USE: The content of the above press release was provided by the “news source” Twelve3south or authorized agency, who is solely responsible for its accuracy. Send2Press® is the originating wire service for this story and content is Copr. © Twelve3south with newswire version Copr. © 2014 Send2Press (a service of Neotrope). All trademarks acknowledged. Information is believed accurate, as provided by news source or authorized agency, however is not guaranteed, and you assume all risk for use of any information found herein/hereupon.