NORTH HOLLYWOOD, Calif., Feb. 4, 2013 (SEND2PRESS NEWSWIRE) — In a move signaling an expansion of its commercial printing business, The Harman Press has re-located from its longtime address in Hollywood to a larger facility at 6840 Vineland Avenue, North Hollywood (CA 91605), in the San Fernando Valley, and added personnel to its executive roster.

Family-owned for three generations, The Harman Press counts clients among the major motion picture studios such as Universal, and is known in political circles as print providers for local, state and national campaigns over the years. Other clients include healthcare giant Kaiser Permanente, and national businesses such as top auto auctioneers Gooding & Company.

Harman Press President Philip Goldner said, “To meet the increasing demand for quality printing in the age of digital information, The Harman Press is consolidating Los Angeles operations in a larger space and gearing up for a more aggressive approach to sales and production that a more demanding marketplace requires.”

New personnel include Garry Williams, who has been named Head of Production. After a stint at Continental Colorcraft, Williams return to The Harman Press where he previously headed production for eighteen years.

Another addition to The Harman Press is Rex Weiner, heading up Marketing and Business Development. Weiner continues his media and business advisory practice through his MediaTek Consulting company.

About The Harman Press:
Based in Los Angeles’ San Fernando Valley, The Harman Press (www.harmanpress.com) utilizes the latest in printing technologies, alongside web offset and letterpress, staying true to its legacy of craftsmanship while leading the way to the digital future. Family-owned since 1943, The Harman Press is also a union shop, affiliated with Teamsters Local 572, and offers the Union Bug to customers-a sign of quality required by many political campaigners, municipal, state, and federal contractors, and customers valuing top-notch workmanship and workplace integrity. 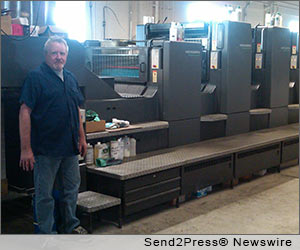 Alternate Headline: In a move signaling an expansion of its commercial printing business, The Harman Press has moved to a larger facility in North Hollywood

NEWS ARCHIVE NOTE: this archival news content, issued by the news source via Send2Press Newswire, was originally located in the Send2Press® 2004-2015 2.0 news platform and has been permanently converted/moved (and redirected) into our 3.0 platform. Also note the story “reads” counter (bottom of page) does not include any data prior to Oct. 30, 2016. This press release was originally published/issued: Mon, 04 Feb 2013 06:55:01 +0000

LEGAL NOTICE AND TERMS OF USE: The content of the above press release was provided by the “news source” The Harman Press or authorized agency, who is solely responsible for its accuracy. Send2Press® is the originating wire service for this story and content is Copr. © The Harman Press with newswire version Copr. © 2013 Send2Press (a service of Neotrope). All trademarks acknowledged. Information is believed accurate, as provided by news source or authorized agency, however is not guaranteed, and you assume all risk for use of any information found herein/hereupon.