Harman Press President Phillip Goldner said, "As a top printer for political campaigns we believe that print stills drives the democratic process, and we are happy to be working with the AAPC which provides the best forum for campaign strategists."

NORTH HOLLYWOOD, Calif., March 9, 2015 (SEND2PRESS NEWSWIRE) — Marking its active role in the political printing arena, The Harman Press will be the Official Printer for the 2015 Pollie Awards & Conference in New Orleans, March 17-19, organized by the American Association of Political Consultants. This will be the second year that The Harman Press has provided the AAPC with printing for its programming material and signage for its annual conference and awards events.

Harman Press President Phillip Goldner said, “As a top printer for political campaigns we believe that print stills drives the democratic process, and we are happy to be working with the AAPC which provides the best forum for campaign strategists.” Goldner will be attending the event, along with Account Executive Dave Wardlow.

AAPC President Art Hackney said, “As the only nonprofit organization for political professionals in America, AAPC succeeds because of the incredible support of our multi-media partners. Contrary to some premature obituaries, print IS NOT DEAD, and Harman Press, as our official printer for the AAPC conference, puts high quality conference materials in the hands of Pollie Conference attendees and we are very grateful for their generous support.”

Widely recognized as the must-attend event for political consultants, media buyers, public affairs specialists, suppliers, industry leaders and journalists, the 2015 AAPC Pollie Awards & Conference is expected to attract more than 500 political professionals to the conference held at the Omni Hotel in New Orleans. The Conference’s programming, designed to empower attendees to leverage the latest techniques in campaign strategy and management, will include sessions on the most important topics in today’s electoral politics and public affairs.

Founded in 1969, the AAPC is a multi-partisan organization of political and public affairs professionals dedicated to improving democracy. The AAPC has over 1,250 members hailing from all corners of the globe. It is the largest association of political and public affairs professionals in the world. For more information, see http://www.theaapc.org/.

ABOUT THE HARMAN PRESS:

The Harman Press ( http://www.harmanpress.com/ ) is a legacy printer leading the way in Graphics Communications in the Digital Age. Family-owned for three generations since 1943, The Harman Press counts clients in the entertainment industry such as 20th Century Fox, Comcast/NBC Universal and Universal Studios Hollywood, and is known in political circles as a union-certified print provider for local, state and national campaigns. Clients include healthcare giant Kaiser Permanente and many national businesses. The Harman Press re-located in 2013 from its longtime Hollywood address to a larger facility in the San Fernando Valley. The Harman Press has recently acquired Fox Printing and A&I Digital and Photographic, adding a wide array of digital print products including large format fine-art and on-demand photo books through the A&I online BookCreator™ http://www.aandibooks.com/. 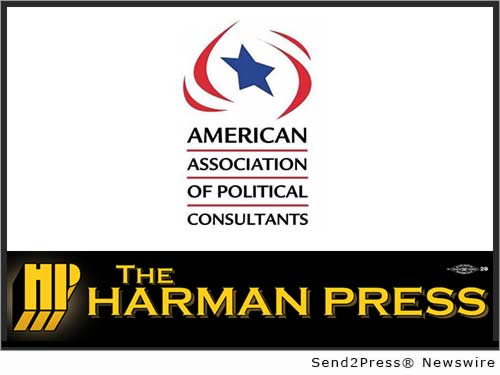 NEWS ARCHIVE NOTE: this archival news content, issued by the news source via Send2Press Newswire, was originally located in the Send2Press® 2004-2015 2.0 news platform and has been permanently converted/moved (and redirected) into our 3.0 platform. Also note the story “reads” counter (bottom of page) does not include any data prior to Oct. 30, 2016. This press release was originally published/issued: Mon, 09 Mar 2015 07:00:02 +0000

View More Advertising and Marketing News
Harman Press President Phillip Goldner said, "As a top printer for political campaigns we believe that print stills drives the democratic process, and we are happy to be working with the AAPC which provides the best forum for campaign strategists."

LEGAL NOTICE AND TERMS OF USE: The content of the above press release was provided by the “news source” The Harman Press or authorized agency, who is solely responsible for its accuracy. Send2Press® is the originating wire service for this story and content is Copr. © The Harman Press with newswire version Copr. © 2015 Send2Press (a service of Neotrope). All trademarks acknowledged. Information is believed accurate, as provided by news source or authorized agency, however is not guaranteed, and you assume all risk for use of any information found herein/hereupon.