Send2Press › Wire › U.S. Business › Florida Business › ‘The Kamasutra Garden’ – A new feature film about Kamasutra is in production in Florida and Los Angeles

"The film will attract people's attention and take them into a fantasy world that is every man's dream," said Blesson Mannil, the Executive Producer.

The mythical Kama Sutra is an ancient Hindu text on human sexual behavior and is famous for describing the art of making love. According to historians, the book “Kamasutra” was scripted by the Hindu philosopher, Vatsyayana Mallagna between 400 BCE and 200 CE. The book illustrates sexual positions that satisfies both sexes and has written that the “art of love making” is a dual responsibility. Hinduism teaches that “Kama” or sexual pleasure is one among the four goals of a human’s life. “Sutra” means a manual. Thus combined “Kamasutra” is the manual of love making.

“The film will attract people’s attention and take them into a fantasy world that is every man’s dream,” said Blesson Mannil, the Executive Producer for “The Kamasutra Garden.”

The feature film is based on the acclaimed novel “The Kamasutra Garden” by Riju R. Sam. 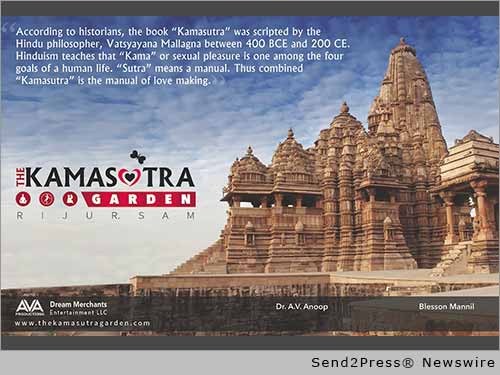 NEWS ARCHIVE NOTE: this archival news content, issued by the news source via Send2Press Newswire, was originally located in the Send2Press® 2004-2015 2.0 news platform and has been permanently converted/moved (and redirected) into our 3.0 platform. Also note the story “reads” counter (bottom of page) does not include any data prior to Oct. 30, 2016. This press release was originally published/issued: Thu, 21 Apr 2016 18:54:20 +0000

View More Entertainment News
"The film will attract people's attention and take them into a fantasy world that is every man's dream," said Blesson Mannil, the Executive Producer.

LEGAL NOTICE AND TERMS OF USE: The content of the above press release was provided by the “news source” Dream Merchants Entertainment LLC or authorized agency, who is solely responsible for its accuracy. Send2Press® is the originating wire service for this story and content is Copr. © Dream Merchants Entertainment LLC with newswire version Copr. © 2016 Send2Press (a service of Neotrope). All trademarks acknowledged. Information is believed accurate, as provided by news source or authorized agency, however is not guaranteed, and you assume all risk for use of any information found herein/hereupon.