WASHINGTON, D.C., Feb. 12, 2015 (SEND2PRESS NEWSWIRE) — The Public Leadership Education Network (PLEN) is pleased to announce its 35th Anniversary event to be held on March 18, celebrating decades of preparing young women to follow their passions and be leaders in public policy. We are honored to have Ambassador Connie Morella and Congresswoman Eleanor Holmes Norton as our Honorary Co-Chairs.

The youngest woman ever elected to Congress, Congresswoman Elise Stefanik, will also join us in celebration as a special guest.

Our Co-Chairs, the Host Committee, Board of Directors, staff, and supporters invite you to celebrate 35 years of cultivating women leaders and to ring in the next 35!

For more information, and to read stories of how PLEN has impacted women at all points on their path toward leadership in public policy, please visit: http://plen.org/35th/.

About the Public Leadership Education Network:
The PLEN is the only national organization with the sole focus of preparing college women for leadership in the public policy arena. PLEN is a nonpartisan 501(c)(3) organization based in Washington, D.C. Through introducing college women to role models, career paths, and skills training before they enter the workforce, PLEN’s mission is to increase the number of women in top leadership positions influencing all aspects of the public policy process.

Since its founding, PLEN has introduced thousands of young women to the Nation’s Capital and the work of public policy. They experience first-hand how public policy is shaped and implemented at the national level. They are better prepared to become the next generation of public policy decision makers.

Students meet with and learn from female leaders making and influencing public policy at the highest levels in Congress, the courts, federal agencies, the private sector, policy research and advocacy organizations, and the media. These women leaders serve as teachers as well as mentors. Students and schools report this experience is invaluable.

Women who have participated in PLEN programs have gone on to be leaders in congressional offices, federal agencies, state legislatures, nonprofits, and advocacy organizations. Currently, 53 percent of our students are women of color or from groups under-represented in the policy arena. Additionally, 13 percent are nontraditional students who use this experience to launch a new career. 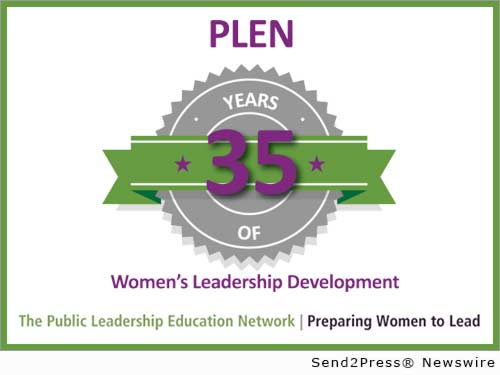 NEWS ARCHIVE NOTE: this archival news content, issued by the news source via Send2Press Newswire, was originally located in the Send2Press® 2004-2015 2.0 news platform and has been permanently converted/moved (and redirected) into our 3.0 platform. Also note the story “reads” counter (bottom of page) does not include any data prior to Oct. 30, 2016. This press release was originally published/issued: Thu, 12 Feb 2015 08:00:02 +0000

LEGAL NOTICE AND TERMS OF USE: The content of the above press release was provided by the “news source” Public Leadership Education Network or authorized agency, who is solely responsible for its accuracy. Send2Press® is the originating wire service for this story and content is Copr. © Public Leadership Education Network with newswire version Copr. © 2015 Send2Press (a service of Neotrope). All trademarks acknowledged. Information is believed accurate, as provided by news source or authorized agency, however is not guaranteed, and you assume all risk for use of any information found herein/hereupon.