BOISE, Idaho, Dec. 17, 2014 (SEND2PRESS NEWSWIRE) — Think Through Learning, authors of the award-winning Think Through Math (TTM), a web-based math instructional system for grades 3 through Geometry, announced today the winner of its 6th Annual Idaho Math Cup. A 5th grade classroom from Twin Lakes Elementary School in the Lakeland School District has been named the 2014 Idaho Math Cup Champion for solving more than 2.9 million complex math problems – more than any other participating class in just 33 days.

The contest, which kicked off in November, engaged 736 elementary schools throughout the state against each other for bragging rights of having successfully completed the most math lessons on the TTM system. Nearly 23,000 Idaho students across the state had the opportunity to participate at school, during after school programs, and at home. During the five-week competition period, students completed more than 120,000 lessons and solved more than 2.9 million complex math problems.

The winning class will receive a trophy, champion banner, T-shirts, certificates and a $100 gift card for a classroom celebration.

More than 2.6 million students in over 17,000 schools across the country currently use TTM as part of their math curriculum. Think Through Math (http://www.thinkthroughmath.com/) provides rigorous adaptive lessons built upon each state’s learning standards, and is supported by the unique functionality of on-line math teachers to assist struggling students in real-time. Available to students from school and home, Think Through Math has an embedded incentive program that motivates students as they solve math problems as well as a charitable giving feature that allows students to convert their points into donations to select charities.

About Think Through Learning and Think Through Math:
Think Through Learning is a company of passionate and committed U.S. math teachers, software engineers and educational innovators whose mission is to help kids learn how to think mathematically. At Think Through Learning, we know that success in mathematics transforms how students perform in school and beyond. Our vision of effective education: a motivating blend of adaptive instruction on higher order thinking skills and on-demand online “instant 1:1 interventions” from live, state-certified U.S. math teachers wherever a student is – school, home or elsewhere – at the precise moment that they need assistance. In 2014, students on Think Through Math will do approximately one billion complex math problems and receive millions of live personalized “just-in-time teaching” sessions.

The 2014 and 2012 recipient of the SIIA CODiE Award for Best Mathematics Instructional Solution, Think Through Math is recognized as the industry’s most respected and fastest-growing supplemental math curriculum. Since its launch in 2012, Think Through Math has become a critical part of the RTI, STEM, and 1:1 strategies of thousands of districts and schools across the country, including some of the largest districts in the United States.

News issued by: Think Through Learning 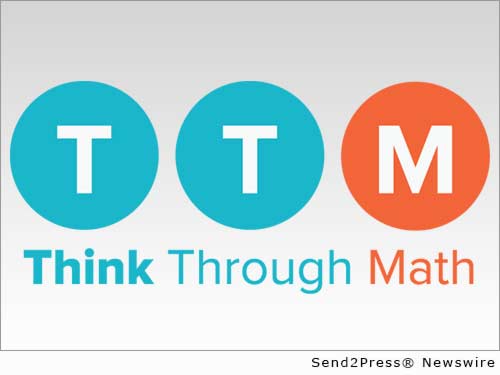 NEWS ARCHIVE NOTE: this archival news content, issued by the news source via Send2Press Newswire, was originally located in the Send2Press® 2004-2015 2.0 news platform and has been permanently converted/moved (and redirected) into our 3.0 platform. Also note the story “reads” counter (bottom of page) does not include any data prior to Oct. 30, 2016. This press release was originally published/issued: Wed, 17 Dec 2014 15:15:38 +0000

More from Think Through Learning

ABOUT THE NEWS SOURCE:
Think Through Learning

LEGAL NOTICE AND TERMS OF USE: The content of the above press release was provided by the “news source” Think Through Learning or authorized agency, who is solely responsible for its accuracy. Send2Press® is the originating wire service for this story and content is Copr. © Think Through Learning with newswire version Copr. © 2014 Send2Press (a service of Neotrope). All trademarks acknowledged. Information is believed accurate, as provided by news source or authorized agency, however is not guaranteed, and you assume all risk for use of any information found herein/hereupon.