Thriller Throws New York Headlong into Terror, Again – Novel to be Released on 9/11

“A striking read that will leave you looking around the corner in fear,” writes Kirkus Reviews in a review of the novel.

This time, Americans are the new weapons in the arsenal of a resurgent al-Qaida.

“The wisdom is that al-Qaida is too broken,” said Shadow, “that all they can marshal in the post-bin-Laden world is the lone-wolf attack. But there are many layers of insurgency that are metastasizing in the real world. Cut off some heads here, and tails pop up there.

“The U.S. State Department estimates that Yemen now has ten times the number of serious Qaida fighters as the Af-Pak region. Then there are the entrenched and powerful tribes like the Haqqani clan. And Qaida is now in Syria.

“The guy on the subway can’t keep track of it all. A new headline, a new group almost daily. So he turns off and turns away. But the Qaida operatives never sleep.”

The book’s hero, Jack Oldham, a commander on New York’s Joint Terrorism Task Force is the incarnation of vigilance. The former NYPD homicide dick never forgot how Qaida came back after the first attempt on the World Trade Center in 1993.

In “Hell City,” New York is ground zero once again as the former NYPD homicide dick and his crack but colorful crew pursue a maddening world of clues that take them through the grittiest precincts of the city, the back roads of America, the lawless regions of Pakistan, the faceless chat rooms of the Internet and the dark corridors of the military-intelligence complex — not to mention the whiskey-tinged environs of The Christmas, a raunchy dive bar in Hell’s Kitchen frequented by Jack and other oft-recovering alcoholic cops. 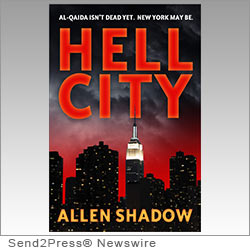 Along the way, Jack strikes up an unlikely romance with the last love child of Beat-generation guru Neal Cassady as they share a lust for the city’s dark side and a yearning for a “lost” America. Through powerful, hard-boiled prose — according to the publisher, Blue City Media — the darkly comic, streetwise novel twists the mind, the language and the senses as it heads for a crash course with disaster.

“Shadow has crafted an entertaining mystery that borrows from the best in mystery and noir,” writes Kirkus Reviews, “while adding a heavy dose of modern paranoia. Jack Oldham, the compelling detective, is riddled with doubts and scars, and rather than being a standard cardboard cutout, he feels vivid and believable as a protagonist. Shadow deftly evokes the constant high alert in a modern security state … in this thrilling lookout for the bad guys’ next move.”

“Hell City,” Shadow’s debut novel, will be released as an e-book on Sept. 11, 2012. The book will be available for $0.99, exclusively on Amazon Kindle (or Kindle compatible readers/apps). For more information, visit http://www.allenshadow.me/ . NEWS ARCHIVE NOTE: this archival news content, issued by the news source via Send2Press Newswire, was originally located in the Send2Press® 2004-2015 2.0 news platform and has been permanently converted/moved (and redirected) into our 3.0 platform. Also note the story “reads” counter (bottom of page) does not include any data prior to Oct. 30, 2016. This press release was originally published/issued: Thu, 30 Aug 2012 04:59:44 +0000

LEGAL NOTICE AND TERMS OF USE: The content of the above press release was provided by the “news source” Blue City Media or authorized agency, who is solely responsible for its accuracy. Send2Press® is the originating wire service for this story and content is Copr. © Blue City Media with newswire version Copr. © 2012 Send2Press (a service of Neotrope). All trademarks acknowledged. Information is believed accurate, as provided by news source or authorized agency, however is not guaranteed, and you assume all risk for use of any information found herein/hereupon.