"November 13 is Treasure Island Day. This event promotes the many places involved in the story of the real Treasure Island and recognizes their role in the making of this true life drama," says author John Amrhein, president of New Maritima Press.

KITTY HAWK, N.C., Nov. 12, 2013 (SEND2PRESS NEWSWIRE) — New Maritima Press’ John Amrhein, author of the award winning book “Treasure Island: The Untold Story” (ISBN 978-0983084303), reminds everyone that November 13 is “Treasure Island Day,” and among the many locations which played a role in a true story of buried treasure that inspired Robert Louis Stevenson is Assateague Island.

Assateague Island, famous for wild ponies and a legendary Spanish galleon, is now linked to a tale of buried treasure. In fact, that treasure is the most famous treasure in the world thanks to Robert Louis Stevenson.

On August 18, 1750, seven Spanish ships cleared Havana Cuba for Spain. A week out they encountered a hurricane forcing the disable fleet into the north bound Gulf Stream wrecking the fleet along the North Carolina and Virginia coast.

The galleon, Nuestra Senora de Guadalupe, arrived at Ocracoke Inlet, North Carolina, dismasted with no rudder. She was towed to safety inside the inlet and anchored in Teach’s Hole where Blackbeard had been killed in 1718. Captain Juan Manual Bonilla made the fatal mistake of hiring Owen Lloyd and his one-legged brother from Hampton Roads to rescue his million dollar cargo. On October 20, they sailed away with over a hundred chests of silver. John Lloyd was captured immediately but Owen made it to Norman Island in the British Virgin Islands where he buried most of his booty on November 13, 1750. Exactly one hundred years later, Robert Louis Stevenson was born on November 13, 1850. He would write his classic tale of fiction about returning to that island.

The 1750 fleet inspired another children’s literary classic. At Assateague Island, the escorting galleon, La Galga, ran ashore on September 5, 1750. Her captain and crew made it safely to shore from the wreck on a raft and with help from the local Indians. Unfortunately, two chests of silver were lost off the raft, but the real treasure that was left was not gold or silver but a pervasive legend.

In 1946, Marguerite Henry heard the story of the wild ponies on Assateague and that they had come from a wrecked Spanish galleon. The shipwreck she had heard about was La Galga although the popular legend did not recall a name of the ship or date of the wreck. The event had been remembered for centuries by the locals of Chincoteague and the surrounding area. Some locals even recalled the exact location of the forgotten inlet which contains the buried shipwreck. That knowledge aided maritime historian, John Amrhein, Jr., in his search and discovery of the remains of La Galga in 1983 within the Chincoteague National Wildlife Refuge. Marguerite Henry’s book, Misty of Chincoteague, published in 1947, made the horses world famous and today they are an integral part of the economy and culture of the Eastern Shore.

The Chincoteague National Wildlife Refuge will soon issue its long overdue Comprehensive Conservation Plan (CCP) which establishes a fifteen year preservation plan for not only wildlife but cultural resources and public use. It has been indicated that La Galga will be included in the conservation plan, an important step towards her inclusion in the National Register of Historic Places.

November 13 is Treasure Island Day. This event promotes the many places involved in the story of the real Treasure Island and recognizes their role in the making of this true life drama. From Ocracoke, North Carolina, and Hampton Roads, Virginia, down to the Caribbean Islands of Tortola, Norman Island, St. Kitts, Antigua, St. Croix, St. Thomas, St. Eustatius, Anguilla, cross the Atlantic to Cadiz, Spain, Greenwich, England, Edinburgh, Scotland, and Flintshire, Wales, back again to Scituate, Massachusetts, and Carmel, California, each played a unique role. And last, but far from the least, is Assateague Island, which holds the last remnant of this truly historic fleet. Two classics in children’s literature are tied to the former warship buried beneath Assateague. For more, visit Treasure-Island-Day.com and read John Amrhein’s award winning book “Treasure Island: The Untold Story.“ 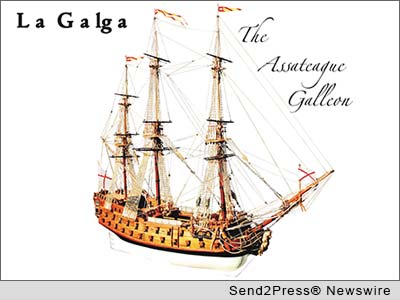 NEWS ARCHIVE NOTE: this archival news content, issued by the news source via Send2Press Newswire, was originally located in the Send2Press® 2004-2015 2.0 news platform and has been permanently converted/moved (and redirected) into our 3.0 platform. Also note the story “reads” counter (bottom of page) does not include any data prior to Oct. 30, 2016. This press release was originally published/issued: Tue, 12 Nov 2013 15:27:25 +0000

View More Books and Publishing News
"November 13 is Treasure Island Day. This event promotes the many places involved in the story of the real Treasure Island and recognizes their role in the making of this true life drama," says author John Amrhein, president of New Maritima Press.