Twenty Years in Six Days: The Future of Aged Spirits

"Our compact reactors combine a series of alternative aging approaches, taking the best parts of each and then tuning them using gas chromatography and mass spectroscopy to clone the natural effects of age on a spirit," says Bryan Davis the inventor of the new technology.

LOUISVILLE, Ky., April 1, 2015 (SEND2PRESS NEWSWIRE) — California-based Lost Spirits LLC has built a new type of chemical reactor capable of making aged spirits with a near identical chemical signature to 20 year old barrel aged products. The new reactors are compact, portable, and will be deployed to 5 distilleries in a beta-test this summer. Currently, there are several patents pending that cover their approach.

While rapid aging of spirits is not a new idea, the Lost Spirits method is the first to accomplish a near identical chemical signature to a similar product aged conventionally for decades. The project has built on more than 5 years of research and investment to develop the approach that finally succeeded.

“Our compact reactors combine a series of alternative aging approaches, taking the best parts of each and then tuning them using gas chromatography and mass spectroscopy to clone the natural effects of age on a spirit,” says Bryan Davis the inventor of the new technology.

He adds, “The end result offers a 98 percent to 99 percent reduction in evaporation losses and a near perfect match to the semi-volatile organic fingerprint of the traditionally aged product. The reactors offer an average 6-day turn around time from fresh white spirit to the shelf, and no chemical additives are involved in the process.”

“The new technology will allow us to reshape the industry. As a consequence, expect prices to fall and quality to rise dramatically.”

After completing the beta-test cycle, the team anticipates being able to fabricate 50 reactors per year. Empirical evidence to support the claims was published this morning under the science heading at www.lostspirits.net.

The results of the project were made public yesterday at the American Distilling Institute Conference, in Louisville, Kentucky.

ABOUT LOST SPIRITS:
Lost Spirits is an engineering company dedicated to understanding and manipulating the production of mature distilled spirits. The company has filed several patent applications based on manipulating the spirits aging process. The company also owns a small distillery in California which functions as a test site for their projects. Learn more at: http://www.lostspirits.net/. 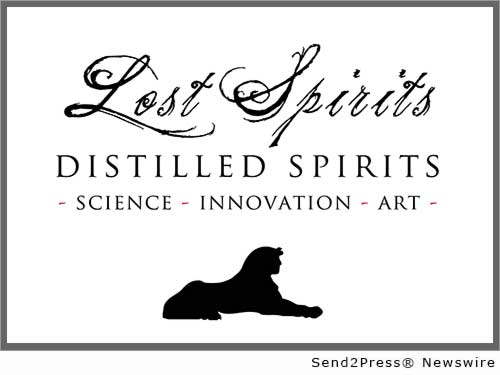 NEWS ARCHIVE NOTE: this archival news content, issued by the news source via Send2Press Newswire, was originally located in the Send2Press® 2004-2015 2.0 news platform and has been permanently converted/moved (and redirected) into our 3.0 platform. Also note the story “reads” counter (bottom of page) does not include any data prior to Oct. 30, 2016. This press release was originally published/issued: Wed, 01 Apr 2015 11:00:27 +0000

View More Business News
"Our compact reactors combine a series of alternative aging approaches, taking the best parts of each and then tuning them using gas chromatography and mass spectroscopy to clone the natural effects of age on a spirit," says Bryan Davis the inventor of the new technology.

LEGAL NOTICE AND TERMS OF USE: The content of the above press release was provided by the “news source” Lost Spirits Distillery or authorized agency, who is solely responsible for its accuracy. Send2Press® is the originating wire service for this story and content is Copr. © Lost Spirits Distillery with newswire version Copr. © 2015 Send2Press (a service of Neotrope). All trademarks acknowledged. Information is believed accurate, as provided by news source or authorized agency, however is not guaranteed, and you assume all risk for use of any information found herein/hereupon.