"Our reforms are working and we are bringing immigration back under control. Fluctuations in the number of applications can lead to visas temporarily taking longer to process," said the UK Border Agency in a statement.

NEW YORK, N.Y., Feb. 18, 2013 (SEND2PRESS NEWSWIRE) — Marriage Visa Help, a global immigration consultancy specializing exclusively in family immigration with an emphasis on fiancee, partner and marriage visas, today announced that postal U.K. marriage visa applications made inside the U.K. can take up to 8 – 10 months to be processed by the UK Border Agency.

With the backlog figures recently released by the UK Border Agency (UKBA) – the backlog of postal further leave to remain (FLRm) applications in November 2012 was standing at well over 6,000 out of 10,805 applications made last year to June – it is small wonder that non-EEA/EU nationals wishing to obtain a U.K. marriage visa or partner visa to stay in the U.K. with their loved ones are not hopeful that their immigration applications will be cleared any time soon.

In response to complaints from many of the couples held in limbo, the Border Agency issued a statement: “Our reforms are working and we are bringing immigration back under control. Fluctuations in the number of applications can lead to visas temporarily taking longer to process. We will continue to address this, but we cannot compromise the security of our border.”

Some couples who have been waiting almost a year to have a decision on their U.K. marriage visa applications have resorted to invoking the Freedom of Information Act to find out where in the mass of paperwork their cases are currently languishing. Again, the UKBA have been tardy in their reply, one couple receiving a letter in which the Agency apologized for not reaching its own 20 day deadline for a response, but they would be hearing shortly. Over one hundred days after the letter was received, there is still no answer – not even another update. As people with “pending” applications in the pipeline are unable to work, volunteer, study or even visit their families in their home country, much hardship is being put upon people whose only wish is to live with their spouse or partner and contribute to the U.K. economy. Instead, they are a financial and emotional drain on their partner which in some cases is proving all but insupportable.

In January 2013, John Vine, chief inspector of borders and immigration, published a report which severely criticized the backlog in processing U.K. marriage and partner visas. Much of his attention was focused on significant delays in handling immigration appeals. Anyone trying to cope with the difficulties of getting through the red tape of the U.K. marriage visa application process without understanding the eligibility requirements is almost certainly doomed to fail. The fact that many of these unresolved cases involve couples who are professionals, sometimes even legal professionals who have a high degree of understanding – should be proof that the system is labyrinthine to an almost impossible degree.

In other news, the British Consulate in New York recently made the announcement that U.K. settlement visa applications which were previously processed in the United States, will now be processed by the UK Border Agency in Sheffield, U.K.. These changes apply to U.K. marriage visas, U.K. unmarried partner visas, U.K. fiancee visas and other related family applications made in the U.S. on or after 21 December 2012. Applicants who provided their biometric information before 21 December 2012 will still have their applications finalized in New York.

Concerns are being voiced that with the extra workload placed upon the UK Border Agency by the relocation of the applications from the New York office to the U.K. immigrant visa processing facility in Sheffield, a department which is already in trouble will sink completely. The applications being made in the U.S. from the end of 2012 will be added to the amount of in-country applications already outstanding and can only make the matter worse. Although it is often believed that changes such as these will have a detrimental effect on processing time and levels of customer service, the UK Border Agency has made reassurances that this will not be the case. 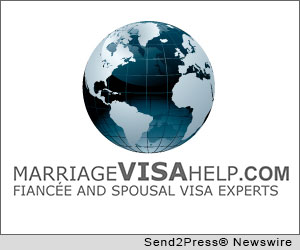 NEWS ARCHIVE NOTE: this archival news content, issued by the news source via Send2Press Newswire, was originally located in the Send2Press® 2004-2015 2.0 news platform and has been permanently converted/moved (and redirected) into our 3.0 platform. Also note the story “reads” counter (bottom of page) does not include any data prior to Oct. 30, 2016. This press release was originally published/issued: Mon, 18 Feb 2013 17:48:10 +0000

View More Business News
"Our reforms are working and we are bringing immigration back under control. Fluctuations in the number of applications can lead to visas temporarily taking longer to process," said the UK Border Agency in a statement.

LEGAL NOTICE AND TERMS OF USE: The content of the above press release was provided by the “news source” Marriage Visa Help or authorized agency, who is solely responsible for its accuracy. Send2Press® is the originating wire service for this story and content is Copr. © Marriage Visa Help with newswire version Copr. © 2013 Send2Press (a service of Neotrope). All trademarks acknowledged. Information is believed accurate, as provided by news source or authorized agency, however is not guaranteed, and you assume all risk for use of any information found herein/hereupon.