"I'm happy to see the UDL plant some roots here on Monday nights in Los Angeles," offers Omar Gooding. "I am personally challenging any and everyone who loves dominoes and also all my celebrity friends to come out and support the Universal Domino League 'Dominos After Dark' at Dave & Buster's. Let's Make History!"

LOS ANGELES, Calif., Aug. 18, 2015 (SEND2PRESS NEWSWIRE) — Starting Monday, August 31, 2015, at Dave & Buster’s Hollywood, the Universal Domino League (UDL) will feature its one-of-a-kind professional domino league to add to the excitement of Dave & Buster’s magnificent brand. With over 200 games under their roof, the eatery and mega arcade will add one more game when the Universal Domino League brings their “Dominos After Dark” event to the party.

Reigning UDL champion, actor Omar Gooding will stake his claim joining 64 players as they compete for a chance to take home over $3,000 in cash and prizes. The tournament begins at 7 p.m. and ends at 10 p.m. Registration starts at 6 p.m. at the door or in advance online at http://universaldominoleague.com/.

Moret’s vision is bigger than just a game of dominoes. A 20-year industry veteran, who worked closely alongside Dr. Dre at Aftermath Entertainment, Moret, conceptualized the league as similar to the World Boxing Association with domino opponent pre-tournament weigh-ins, championship belts and world-class domino tournaments.

Dominoes is the first game ever invented and provides an arena where the playing field is leveled. Players can participate, regardless of gender or physical prowess and test their skills, gain recognition, and even earn a living playing professional dominos. UDL’s host tournaments and head to head high stakes domino matches for major cash and prizes nationwide.

Players use UDL scoring chips to keep score and a tournament format comparable to the World Series of Poker. The players are marketed, promoted, ranked, sanctioned, and governed by UDL. Moret also stipulated the UDL had its own official gaming mat and game clock, which insures fast-paced action, similar to the NBA’s shot-clock. In addition, Moret has created a charity facet of the league, UDL Kids, a program that helps at-risk youth and visits children’s hospitals teaching arithmetic using dominoes.

“I’m happy to see the UDL plant some roots here on Monday nights in Los Angeles,” offers Omar Gooding. “I am personally challenging any and everyone who loves dominoes and also all my celebrity friends to come out and support the Universal Domino League ‘Dominos After Dark’ at Dave & Buster’s. Let’s Make History!”

“We are excited to bring ‘Dominos After Dark’ to Dave & Buster’s,” adds Moret. “With their emphasis on creating a playground environment of fun mixing food, drinks and games, they are a perfect fit for our brand and our league.”

For additional information on the Universal Domino League go to http://universaldominoleague.com/. 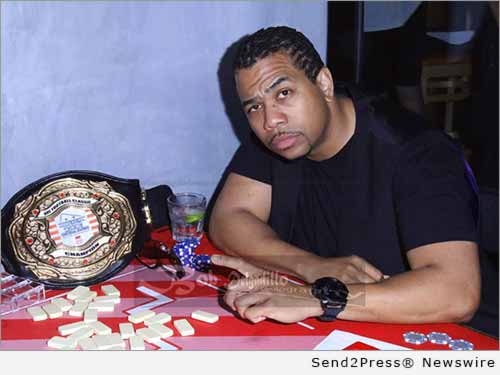 NEWS ARCHIVE NOTE: this archival news content, issued by the news source via Send2Press Newswire, was originally located in the Send2Press® 2004-2015 2.0 news platform and has been permanently converted/moved (and redirected) into our 3.0 platform. Also note the story “reads” counter (bottom of page) does not include any data prior to Oct. 30, 2016. This press release was originally published/issued: Tue, 18 Aug 2015 08:00:37 +0000

View More African American Interest News
"I'm happy to see the UDL plant some roots here on Monday nights in Los Angeles," offers Omar Gooding. "I am personally challenging any and everyone who loves dominoes and also all my celebrity friends to come out and support the Universal Domino League 'Dominos After Dark' at Dave & Buster's. Let's Make History!"

LEGAL NOTICE AND TERMS OF USE: The content of the above press release was provided by the “news source” Universal Domino League or authorized agency, who is solely responsible for its accuracy. Send2Press® is the originating wire service for this story and content is Copr. © Universal Domino League with newswire version Copr. © 2015 Send2Press (a service of Neotrope). All trademarks acknowledged. Information is believed accurate, as provided by news source or authorized agency, however is not guaranteed, and you assume all risk for use of any information found herein/hereupon.