“Gazing Through the Looking Glass” exhibit at the Vallejo Naval & Historical Museum explores how some artists have picked up Lewis’s characters and made them part of contemporary art: the exhibit features work by celebrated illustrator Barry Moser, visionary artist Charles Ware, and fantasy artist Ronnie Goodman. Lectures, film, and presentations will accompany the exhibit.

Vallejo’s Grand Homes Tour from charming historic homes ranging from imaginative craftsmanship to Victorian Italianate with a special treat to visit one of Burning Man’s top creations the NeverwasHaul built in 2006 – a magical nomadic 19th century Victorian three level structure inspired by the works of Jules Verne-decked out for the holidays.

This year celebrates the Festival’s 5th year anniversary with city-wide participation – creating positive exposure for Vallejo and contributing greatly to the efforts in revitalizing the Downtown.

Art mobiles, fire-shooting snails, dragons, and horses light-up Vallejo’s streets – marching and dancing Maritime Academy Cadets grace the downtown, other attendees donned with top hats and Victorian attire come in droves to celebrate Wonderland once again. There is a 5 foot Santa G-Nome that shoots fire from the top of his head thirty feet into the air, giant multicolored Wagon Wheel: The Vicious Cycle, the Mad Hatter, mouse, Lion King, Cheshire Cat, as well as roving Queens and Duchesses, along with the white rabbit – giant mushrooms and cupcakes come alive, an adult and children fantasy Wonderland that continues on weekends throughout the month of December.

Our YouTube video produced by WhatSF, a weekly television program in San Francisco, has a growing viewership of over 100,000: http://youtu.be/jN6MhLHYFrI. 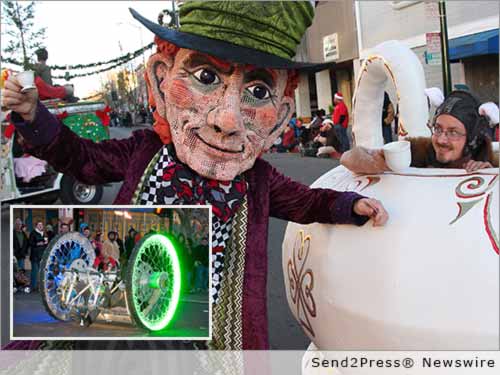 NEWS ARCHIVE NOTE: this archival news content, issued by the news source via Send2Press Newswire, was originally located in the Send2Press® 2004-2015 2.0 news platform and has been permanently converted/moved (and redirected) into our 3.0 platform. Also note the story “reads” counter (bottom of page) does not include any data prior to Oct. 30, 2016. This press release was originally published/issued: Tue, 25 Nov 2014 19:42:23 +0000

Through the Looking Glass

LEGAL NOTICE AND TERMS OF USE: The content of the above press release was provided by the “news source” Mad Hatter Holiday Festival or authorized agency, who is solely responsible for its accuracy. Send2Press® is the originating wire service for this story and content is Copr. © Mad Hatter Holiday Festival with newswire version Copr. © 2014 Send2Press (a service of Neotrope). All trademarks acknowledged. Information is believed accurate, as provided by news source or authorized agency, however is not guaranteed, and you assume all risk for use of any information found herein/hereupon.