What Happened to Gallaher’s Money?

"E.B. Gallaher died in 1953 and with his wife were the sole stockholders in a Norwalk, Connecticut based manufacturing company," says author DJV Murphy.

CALIFON, N.J., Feb. 26, 2013 (SEND2PRESS NEWSWIRE) — Author djv murphy of Califon, N.J. believes he may have uncovered a long lost mystery about a sizable estate left to the Stevens Institute of Technology in Hoboken, N.J. In doing research for the biography “Who Was E. B. Gallaher?” (ISBN: 978-1480043770), Murphy discovered that a bequest left by the Connecticut millionaire to the Institute for the development of a research center was never carried out.

Murphy interviewed a number of the Institute’s staff and none were able to pinpoint what happened to the bequest nor why the Institute failed to create the research center in Norwalk.

“Gallaher died in 1953 and with his wife were the sole stockholders in a Norwalk, Connecticut based manufacturing company,” says Murphy. “His will directed that his entire estate be left to Stevens following his wife’s death in 1965. However it seems as if the $25 million estate in today’s dollars was not used to carry out his special bequest.”

The bequest included his 10,000 square foot mansion in Norwalk situated on 227 acres of prime real estate, as well as his stock in the Clover Manufacturing Company, plus a sizable amount of liquid assets.

“The property was sold to the City of Norwalk by Stevens Institute in 1965 and was turned into open space called Cranbury Park. The Institute took over operations of Gallaher’s business, The Clover Manufacturing Company, for a few years following receipt of the bequest and then sold it. It is now part of the Henkel Corporation,” said Murphy.

Gallaher was an entrepreneur, inventor, and business mogul who was born to American parents in Paris in 1873 and educated in the United States. He graduated from the Institute in 1894 and soon began inventing a number of mechanical devices. He founded the Keystone Automobile Company in Philadelphia in 1897, and headed a number of other business concerns in the years following.

Murphy said the subject of this biography was part of the early 20th Century business leadership in New York City and was friends with Thomas Edison, George Westinghouse, John Jacob Astor, and John D. Rockefeller among others.

Gallaher, in addition to his management of Clover, also published a newsletter called “The Clover Business Service,” which promoted the right wing politics of the day. It was reported that the newsletter had a national circulation of 150,000 subscribers and was published between 1922 and 1953.

The biography follows the early life of Gallaher and highlights the numerous inventions of the late 19th and early 20th Centuries. This period saw the development of electricity, the automobile, airplane, telephone, phonograph, elevator, motion pictures, and a host of other inventions.

“Who Was E. B. Gallaher?” is available in paperback and Kindle editions, through Amazon.com, libraries, and through the author’s website at: www.bunkertreasures.com . 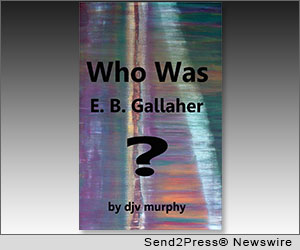 Alternate Headline: In new book, author DJV Murphy believes he may have solved mystery of what happened to millionaire EB Gallaher’s money

NEWS ARCHIVE NOTE: this archival news content, issued by the news source via Send2Press Newswire, was originally located in the Send2Press® 2004-2015 2.0 news platform and has been permanently converted/moved (and redirected) into our 3.0 platform. Also note the story “reads” counter (bottom of page) does not include any data prior to Oct. 30, 2016. This press release was originally published/issued: Tue, 26 Feb 2013 15:25:44 +0000

View More Books and Publishing News
"E.B. Gallaher died in 1953 and with his wife were the sole stockholders in a Norwalk, Connecticut based manufacturing company," says author DJV Murphy.

ABOUT THE NEWS SOURCE:
DJV Murphy

LEGAL NOTICE AND TERMS OF USE: The content of the above press release was provided by the “news source” DJV Murphy or authorized agency, who is solely responsible for its accuracy. Send2Press® is the originating wire service for this story and content is Copr. © DJV Murphy with newswire version Copr. © 2013 Send2Press (a service of Neotrope). All trademarks acknowledged. Information is believed accurate, as provided by news source or authorized agency, however is not guaranteed, and you assume all risk for use of any information found herein/hereupon.