"I am so honored to receive such an award on behalf of entire nation, for all hard labor that we've done," said Afineevsky.

LOS ANGELES, Calif., Dec. 30, 2015 (SEND2PRESS NEWSWIRE) — American-Russian Business Council is pleased to announce that its member and director of the Netflix original documentary “Winter on Fire: Ukraine’s Fight for Freedom,” Evgeny Afineevsky, has been awarded the Medal of the Cross of Ivan Mazepa by Ukrainian President Petro Poroshenko. Early this year Afineevsky already received Order of St. Prince Vladimir the Great from His Holiness, Filaret Patriarch of Kyiv & All Rus’-Ukraine. The film takes viewers behind the front lines of the Ukrainian uprising in 2013-2014.

“It is symbolic that the award is given to a Russian who fought for the independence of Ukraine and the formation of Europe. On behalf of the Ukrainian people, I am grateful for the work you’ve done,” said Poroshenko, noting the symbolism of the fact that it was the first such award he was presenting as President and it was given to an American of Russian descent.

The Cross of Ivan Mazepa honors citizens of Ukraine, foreign citizens or stateless persons for significant contribution to the revival of national, cultural, artistic, spiritual, architectural, military and historical heritage of Ukraine, for achievements in state, diplomatic, humanistic, scientific, educational and charitable activity.

“I am so honored to receive such an award on behalf of entire nation, for all hard labor that we’ve done,” said Afineevsky. “For all the bruises, concussions, and injuries that I and my true team got during these days and nights of documenting history for the future generation, for the people all over the world, that one day they can learn, what had happened in the middle of peaceful country, in the middle of Europe.”

In November 2013 Afineevsky flew to Kiev to observe Ukraine’s fight for its identity and to capture the revolution on film. The result is the powerful and inspiring documentary of anti-government demonstrations that startled the world. Afineevsky previously directed 2 other documentaries and seven award winning feature films. He is a member of the Academy of Television Arts & Sciences and Directors Guild of America. 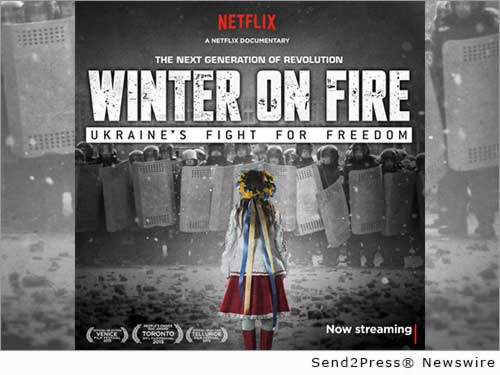 Los Angeles Times’s Kenneth Turan wrote that “‘Winter on Fire,’ is imbued with a single and quite heartening spirit” and it is “an examination of what societal change looks like moment to moment.” A.O. Scott (New York Times) called the movie “Powerful,” adding “it tells a vivid tale of heroism and villainy.” Mark Johnson from Awards Circuit noted it was “the best documentary I’ve seen this year.” Tricia Olzewski (The Wrap) identified the film as “a testament to the human spirit.” 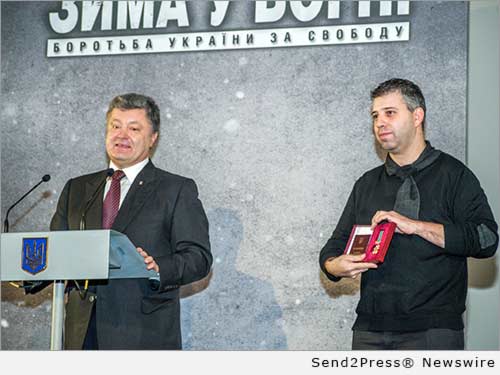 NEWS ARCHIVE NOTE: this archival news content, issued by the news source via Send2Press Newswire, was originally located in the Send2Press® 2004-2015 2.0 news platform and has been permanently converted/moved (and redirected) into our 3.0 platform. Also note the story “reads” counter (bottom of page) does not include any data prior to Oct. 30, 2016. This press release was originally published/issued: Wed, 30 Dec 2015 07:00:30 +0000

View More Awards and Honors News
"I am so honored to receive such an award on behalf of entire nation, for all hard labor that we've done," said Afineevsky.

LEGAL NOTICE AND TERMS OF USE: The content of the above press release was provided by the “news source” American-Russian Business Council or authorized agency, who is solely responsible for its accuracy. Send2Press® is the originating wire service for this story and content is Copr. © American-Russian Business Council with newswire version Copr. © 2015 Send2Press (a service of Neotrope). All trademarks acknowledged. Information is believed accurate, as provided by news source or authorized agency, however is not guaranteed, and you assume all risk for use of any information found herein/hereupon.