"Surfers and beach-goers will no longer need to shake their towel to smithereens just to get the sand off - the Sandusa is specially designed to repel sand, meaning you can leave the beach at the beach," Mr. Brown said.

GOLD COAST, Australia, June 27, 2013 (SEND2PRESS NEWSWIRE) — The world’s first sand-resistant beach towel, the Sandusa, is now available for pre-order on popular crowdfunding website, Indiegogo. Australian creator of the towel, Baz Brown, said the crowdfunding site would be a good launchpad for the innovative product to reach interested consumers around the globe.

“Surfers and beach-goers will no longer need to shake their towel to smithereens just to get the sand off – the Sandusa is specially designed to repel sand, meaning you can leave the beach at the beach,” Mr. Brown said.

“After years of testing, I have perfected the prototype and feel the Sandusa is ready to take the stage on beaches around the world, which is why I am launching it for pre-order on global crowdfunding site, Indiegogo.

“My goal is to raise $50,000 in 60 days. This amount will set the first production run of the Sandusa beach towel in motion, meaning the towel will be available by the end of 2013.

“Rather than getting regular beach towels for Christmas, you can deck the whole family out with the newest innovation in beach towel technology for a gift they’ll never forget.

“Towels are available for individual sale or in packs of up to 10 – meaning the more you buy, the better value you get.”

Despite the core surfing market, the Sandusa is not just limited to the beach. The patent-protected towel is designed with a waterproof layer, making it suitable for lots of activities.

“Apart from the beach and surfing community, I’ve had interest from fitness companies, swimmers and parents of young children, to name a few, that would love a Sandusa for a whole range of practical uses.

“That’s the best part about the Sandusa – it can be enjoyed by anyone and everyone.

“Keep up to date on Facebook (/TheSandusa) and Twitter (@TheSandusa), and watch the video to see what it’s all about.

“Most importantly, check out the Indiegogo campaign at www.igg.me/at/sandusa and be the first of your friends to order the world’s only sand-resistant beach towel, the Sandusa.” 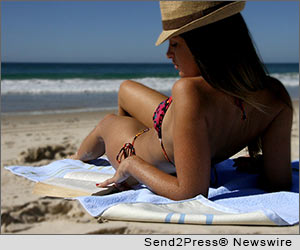 NEWS ARCHIVE NOTE: this archival news content, issued by the news source via Send2Press Newswire, was originally located in the Send2Press® 2004-2015 2.0 news platform and has been permanently converted/moved (and redirected) into our 3.0 platform. Also note the story “reads” counter (bottom of page) does not include any data prior to Oct. 30, 2016. This press release was originally published/issued: Thu, 27 Jun 2013 06:58:16 +0000

View More Australia Business News
"Surfers and beach-goers will no longer need to shake their towel to smithereens just to get the sand off - the Sandusa is specially designed to repel sand, meaning you can leave the beach at the beach," Mr. Brown said.

ABOUT THE NEWS SOURCE:
Baz Brown

LEGAL NOTICE AND TERMS OF USE: The content of the above press release was provided by the “news source” Baz Brown or authorized agency, who is solely responsible for its accuracy. Send2Press® is the originating wire service for this story and content is Copr. © Baz Brown with newswire version Copr. © 2013 Send2Press (a service of Neotrope). All trademarks acknowledged. Information is believed accurate, as provided by news source or authorized agency, however is not guaranteed, and you assume all risk for use of any information found herein/hereupon.