"Shining a light on the plight of injured service people is part of their process of continuing to contribute," says Never Quit Challenge event organizer Shawn Alladio.

TUSTIN, Calif., Sept. 3, 2014 (SEND2PRESS NEWSWIRE) — All of the practice is done; all of the planning is complete. Now it’s time for several teams of war-injured military veterans and active servicemen participating in the Never Quit Challenge to put their personal watercraft into the Pacific Ocean and do what they’ve always done – finish the job.

This time, the job entails something far less dangerous than the harrowing exploits that sent so many of them home to the U.S. for physical rehabilitation. While grueling, the four-day fund-raising run down the California coast from Morro Bay starting next Monday will only severely tire them, not irreparably injure them.

But, according to Never Quit Challenge event organizer Shawn Alladio, that’s their way of making a very large statement.

“Shining a light on the plight of injured service people is part of their process of continuing to contribute,” she said.

“Most of them are still actively involved in the military in one form or another, but they regularly see others coming back home facing months of rehabilitative work and they see the Never Quit Challenge as making a dual statement,” said Alladio.

First, she says, it shines a light on the need for the public to recognize individual contributions, and at the same time it points out that these vital social programs are worth “going the distance” for as veterans support the charities.

Alladio organized the first Never Quit Challenge in 2013. It was held on the East Coast, with the teams riding from Key West to New York City to coincide with 9/11 commemorative activities.

She said more than $100,000 was raised and the team is hopeful that they can exceed that goal this year. The Never Quit Challenge fund-raiser will make stops in Santa Barbara, Ventura, Marina del Rey, Long Beach, Catalina Island, Dana Point, and Oceanside before concluding Sept. 11 in San Diego.

All of the support for the lengthy ocean trip is being provided by volunteers, many from Alladio’s K38 Water Safety training team, which works with military, law enforcement, and water rescue operations around the country.

Kawasaki Motors Corp., U.S.A. is providing the JET SKI(R) watercraft used by the teams, and Alladio has solicited help from numerous other companies so that virtually all of the funds raised are immediately available to the charities.

“That’s important for these men,” she said. “They want to know that what they’re accomplishing next week isn’t just pushing them to their own limits. They want to see tangible results that will help others who will have to go through what they’ve already done.”

More information on the Second Annual Never Quit Challenge is available at the event’s Website – http://www.neverquitchallenge.com – and public, tax deductible donations can be made at https://www.crowdrise.com/2014neverquitchallenge/fundraiser/shawnalladio. 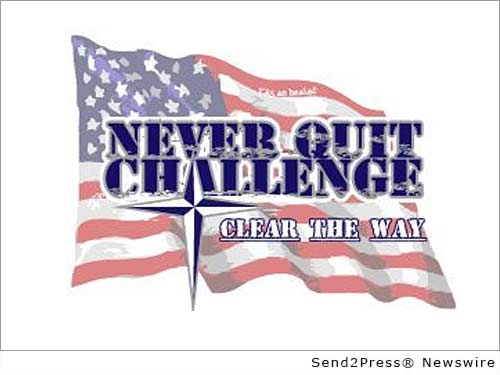 NEWS ARCHIVE NOTE: this archival news content, issued by the news source via Send2Press Newswire, was originally located in the Send2Press® 2004-2015 2.0 news platform and has been permanently converted/moved (and redirected) into our 3.0 platform. Also note the story “reads” counter (bottom of page) does not include any data prior to Oct. 30, 2016. This press release was originally published/issued: Wed, 03 Sep 2014 09:00:27 +0000

ABOUT THE NEWS SOURCE:
Shawn Alladio

LEGAL NOTICE AND TERMS OF USE: The content of the above press release was provided by the “news source” Shawn Alladio or authorized agency, who is solely responsible for its accuracy. Send2Press® is the originating wire service for this story and content is Copr. © Shawn Alladio with newswire version Copr. © 2014 Send2Press (a service of Neotrope). All trademarks acknowledged. Information is believed accurate, as provided by news source or authorized agency, however is not guaranteed, and you assume all risk for use of any information found herein/hereupon.