NORFOLK, Va., Sept. 11, 2017 (SEND2PRESS NEWSWIRE) –- Mekani G. Collins was born a micro-preemie at one-pound, two and a half ounces. Doctors stated he would not live. He survived imminent death, seven surgeries and severe sleep apnea (he stopped breathing 61 times in one night) before his fourth birthday. Today, health is so important to him that he wrote a book – “Stinking Thinking Isn’t Cool!” (ISBN: 978-0998819419) published by Textorium Publishing. It’s an action-packed teenage adventure that’s all about pushing boundaries and making the right choices. 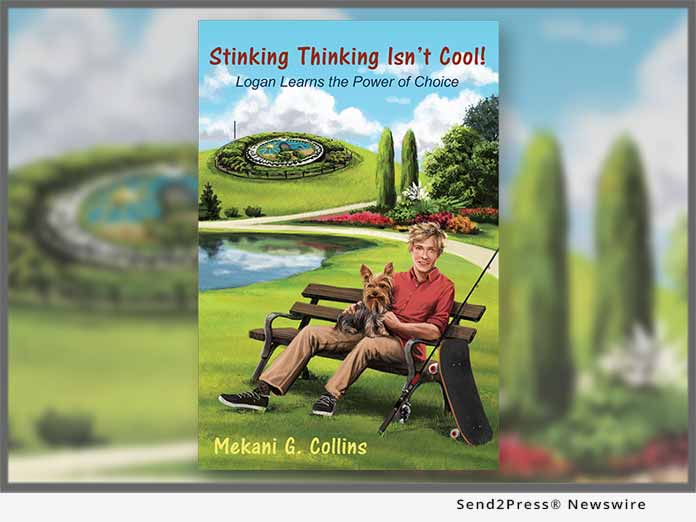 A book signing is scheduled at Barnes and Noble on September 23 from 1 p.m. to 3 p.m. at the MacArthur Center at 300 Monticello Ave., Norfolk, VA.

The story is set in Virginia Beach, Va. and centers around four characters – Logan Murphy and his brother James and two friends, Brianna and Carleto. The author balances right thinking versus wrong (stinking) thinking to create a humorous and thoughtful tale that promises to entertain.

As Logan’s thinking transitions from his teenage world into that of adults, outrageous adventures and escapades ensue. For example, he throws the neighbor’s clock out of a window to repair it, buys a dog and rabbit with his mother’s grocery money and attacks a burglar. The choices he makes are all about exploring and pushing limits, preparing him and his companions to confront the world on their own.

“Stinking Thinking Isn’t Cool” has been compared to classics such as “Peter Pan” and “Tom Sawyer.”

This 116-page book is available in paperback, on Kindle and Nook.

About the Author:
Mekani G. Collins is an honor roll student, author, poetry writer and amateur photographer. He’s the recipient of the Mensa Foundation’s “Excellence in Reading” Award and has published award-winning short stories and poetry. He has also received recognition from the Smithsonian National Museum of African American History and Culture for his philanthropy in raising money. He enjoys reading, swimming and spending time with family and friends.

ABOUT THE NEWS SOURCE:
Textorium Publishing

LEGAL NOTICE AND TERMS OF USE: The content of the above press release was provided by the “news source” Textorium Publishing or authorized agency, who is solely responsible for its accuracy. Send2Press® is the originating wire service for this story and content is Copr. © Textorium Publishing with newswire version Copr. © 2017 Send2Press (a service of Neotrope). All trademarks acknowledged. Information is believed accurate, as provided by news source or authorized agency, however is not guaranteed, and you assume all risk for use of any information found herein/hereupon.