LA MESA, Calif., Aug. 8, 2011 (SEND2PRESS NEWSWIRE) — According to LegalizeFerrets.org, the Department of Fish and Game has put impossible restrictions on the ferret legalization process. “We’re going by the book – but they’re ripping pages out from under us. Would California tolerate that behavior from any other Department?” says Pat Wright, of LegalizeFerrets.

The Fish and Game Commission has put ferret owners in a legal Catch-22.

Back in 2000, the Fish and Game Commission told ferret proponents that in order for them to consider legalizing the domestic ferret in California, they (the proponents) would need to fund an Environmental Impact Report.

11 years later, a preliminary EIR was produced by Dr. Geo Graening at Sacramento State University. The Fish and Game Commissioners at first refused to accept it.

Even after they did, they objected with, “You don’t have a CEQA (California Environmental Quality Act) checklist.” This document had been prepared and presented months earlier. It was again presented to the Commission after this objection.

Sonke Mastrup, the Deputy Director of the Department of Fish and Game, responded with, “No reason to review the document until the Commissioners decide to ‘go to notice.'”

A separate response was, “We can’t go to notice until we review the documents.”

I sent an email to Mr. Mastrup on July 21st:

Can you give us any updates? Our offer to pay for staff time stands (though don’t run up our bill until we have $ on hand, we’re about as solvent as the state of California!)

They won’t go to notice until they research the document.

They won’t research the document until they go to notice.

Thank you for any help.

Mr. Mastrup responded with: We are in such a situation. Perhaps an independent review could help. I will ask around.

Once more we go in front of the California Fish and Game Commissioners. Every six weeks or so they hold meetings and have a public comments period. This is the average citizen’s opportunity to address the Commission.

About the only response we get is, “Your time is up.”

When asked a simple question – “What more can we do?” The silence is deafening. They won’t even acknowledge the question anymore.

Imagine you have a grievance with the government. Perhaps a Commission appointed by the Governor. You present all the facts, you cover your bases, and you spend private money – but you don’t get an answer. Nothing. Stony silence.

We’re not just upset with the Commissioners. We’re upset with our leaders.

We collected 500 signatures outside a PetSmart in Santee, home of newly elected Assemblyman Brian Jones, back in January. A local news station covered our efforts. “Please Assemblyman Jones,” we begged, “Introduce a ferret legalization bill.”

We never heard from Assemblyman Jones. We heard on the news that night that our Assemblyman had other issues on his plate. We didn’t get a phone call, email or postcard. Our elected official ignored us.

A few months later, we collected thousands of signatures at the Orange County Pet Expo. We sent these signatures to Governor Jerry Brown. We’ve heard nothing back.

The most we ever got was a tweet from Sutter Brown, the governor’s pet corgi: “Geesh, ferrets? I think they’ve been trying 2 legalize in CA since last time dad was gov!”

Ferrets are not a burning issue – unless of course you have them in California. Then you can’t get a security clearance. You can’t be a foster parent. You have to be on guard at work every day.

And you certainly can’t take your pet ferret out in public. Even though a million other pet owners can!

We have documented, unbiased research showing all the concerns expressed by the Department and Commission of Fish and Game are baseless.

Ferrets are legal in 48 states. California has more ferrets than the next two states combined. What kinds of problems do we hear from those other states? None.

Not only is their stance ridiculous, the way Fish and Game treats us is disgraceful. This is not how a healthy society operates. People should have the ability to address their leaders, and be treated with dignity and respect.

The California Fish and Game Commissioners have not done that. Their treatment of California ferret enthusiasts should not be tolerated. For the health of our society, for the well being of our people, something needs to be done.

“We hold these truths to be self-evident, that all men are created equal, that they are endowed by their Creator with certain unalienable Rights; that among these are Life, Liberty and the pursuit of Happiness. – That to secure these rights, Governments are instituted among Men, deriving their just powers from the consent of the governed, – That whenever any Form of Government becomes destructive of these ends, it is the Right of the People to alter or to abolish it, and to institute new Government, laying its foundation on such principles and organizing its powers in such form, as to them shall seem most likely to effect their Safety and Happiness.” 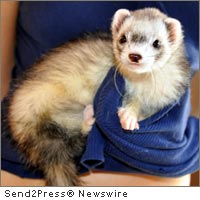 NEWS ARCHIVE NOTE: this archival news content, issued by the news source via Send2Press Newswire, was originally located in the Send2Press® 2004-2015 2.0 news platform and has been permanently converted/moved (and redirected) into our 3.0 platform. Also note the story “reads” counter (bottom of page) does not include any data prior to Oct. 30, 2016. This press release was originally published/issued: Mon, 08 Aug 2011 17:44:31 +0000

LEGAL NOTICE AND TERMS OF USE: The content of the above press release was provided by the “news source” Legalize Ferrets or authorized agency, who is solely responsible for its accuracy. Send2Press® is the originating wire service for this story and content is Copr. © Legalize Ferrets with newswire version Copr. © 2011 Send2Press (a service of Neotrope). All trademarks acknowledged. Information is believed accurate, as provided by news source or authorized agency, however is not guaranteed, and you assume all risk for use of any information found herein/hereupon.