FORT WORTH, Texas, Aug. 22, 2011 (SEND2PRESS NEWSWIRE) — Four years may not be that much time for many grownups in the comic book industry. But for teenage writer Jake Tinsley, it has been literally one-fourth of his life. Jake was 12 when he first started writing comic book and comic strip scripts for Wham Bang Comics, a company he started with his father.

Now nearly 17, Jake has taken over as the small company’s publisher. And he also is still its main writer.

He continues working with expert Manga artist Jason Dube on a regular basis to create their fantastic stories.

There’s a life lesson or two to be learned in reading “Bullies” – which is the way Jake likes to frame his comic book stories these days.

Drew LeBow, 9, of Austin, is easily Jake’s biggest fan and has been for a couple of years. Jake sent Drew an advance copy of “Bullies.”

“It was one of the best comics I have read,” the 9-year-old said. “I liked it a lot. Night Owl chose to do the right thing. He saved a bully. He also made sure the bully didn’t bully any more people.”

Jake’s been careful to weave lessons into his stories since 2009’s “Amber Hagerman Deserves Justice: A Night Owl Story,” his most recent published comic book.

“Amber” was critically and internationally acclaimed for explaining to children (in a non-traumatic way) the importance of the Amber Plan – the nationwide Amber Alert system that tries to locate kidnapped children.

Jake remains dedicated to getting justice for Amber, 9, who was kidnapped and killed in Arlington, Texas in January 1996. He keeps in contact with Amber Hagerman’s mother, Donna Norris.

“Bullies Deserve Justice” came about after Jake was asked to write a comic book that took on this very serious subject.

Like the title suggests, the hero of the story is Jake’s trademark character Night Owl, a 12-year-old earth shaman with magic powers who is haunted by the murder of his grandfather.

In the story, Night Owl must deal with a bully without hurting him or making a problematic situation worse.

They mostly focus on Night Owl, although Jake also wrote an as yet unpublished zombie story for rock star Lita Ford and her family, “The Gillettes: Family Business.”

In one of many press releases about that comic, Lita Ford spoke highly of Jake’s work.

“Our kids are extreme and Jake is extreme as a writer,” Lita Ford said in an August 2009 release. “They’re all mighty kids and it was fun to get them together.”

Jake’s tenacity as a creator impressed Sherman Powers, the company’s executive producer, to come on board with Wham Bang Comics, Powers explained.

Jason Dube has worked with Jake as the company’s art director these past four years because he has always been impressed with Jake’s passion for comic books.

“I would have to say that ‘Bullies’ #1 was by far Jake’s best story,” Dube said. “It was a complete story with a beginning and end and a message in the middle for the youth about being a better person then the bullies who may pick on you. It’s a pleasure to see how Jake’s storytelling evolves as he moves into adulthood.”

The artist isn’t the only one to notice.

In recognition of Jake’s work on the Amber Hagerman cold case (no suspects have yet been found), Texas Governor Rick Perry issued a proclamation naming Jake a “Shining Star of Texas.”

“You continue to impress people all across the Lone Star State with your creativity, talent and determination. We commend you on using your fictional characters to help shine a light on real-life unsolved crimes,” Dede Keith of the governor’s office said in a 2009 letter to Jake.

Jake bases Night Owl largely on himself. Like Night Owl, Jake still has his freckles and sense of humor – only Jake’s now nearly 6 feet tall.

In addition to the premiere of his Bullies comic, Jake as publisher is also debuting the comic book “Genius #1,” written by renowned author and comic book writer Rachel Pollack with art by Wham Bang Comics veteran Casey Columbus.

Copies of “Night Owl: Bullies Deserve Justice” and future copies of “Genius #1” can be purchased online from http://www.comixpress.com . 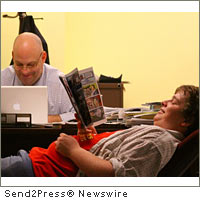 NEWS ARCHIVE NOTE: this archival news content, issued by the news source via Send2Press Newswire, was originally located in the Send2Press® 2004-2015 2.0 news platform and has been permanently converted/moved (and redirected) into our 3.0 platform. Also note the story “reads” counter (bottom of page) does not include any data prior to Oct. 30, 2016. This press release was originally published/issued: Mon, 22 Aug 2011 18:24:50 +0000

LEGAL NOTICE AND TERMS OF USE: The content of the above press release was provided by the “news source” Wham Bang Comics or authorized agency, who is solely responsible for its accuracy. Send2Press® is the originating wire service for this story and content is Copr. © Wham Bang Comics with newswire version Copr. © 2011 Send2Press (a service of Neotrope). All trademarks acknowledged. Information is believed accurate, as provided by news source or authorized agency, however is not guaranteed, and you assume all risk for use of any information found herein/hereupon.