MOUNTAIN LAKES, N.J., Sept. 7, 2011 (SEND2PRESS NEWSWIRE) — U.S. enterprises and consumers are expected to spend more than $44 billion over the next five years on Ethernet services provided by carriers, according to a new market research study from The Insight Research Corporation. With metro-area and wide-area Ethernet services readily available from virtually all major data service providers, the market is expected to grow from $4.0 billion in 2011 to reach nearly $11.1 billion by 2016.

According to Insight Research’s market analysis study, “Carriers and Ethernet Services: Public Ethernet in Metro & Wide Area Networks, 2011-2016,” Ethernet’s central driver continues to be its ability to meet seemingly endlessly growing bandwidth demands at lower cost and with greater flexibility than competing services. While the emergence of new high-bandwidth 40- and 100- Gigabit/s services is proceeding slowly, due largely to high current equipment prices, these will become increasingly important during the 2011-2016 forecast period.

“Wireless backhaul is the fastest-growing sector within the Ethernet marketplace,” says Robert Rosenberg, president of Insight Research. “Ethernet can provide the necessary backhaul at lower unit costs and with greater flexibility than the older technology. The market continues to be paced by voracious bandwidth demands from its longstanding key verticals such as finance, schools, government and healthcare-whose data transmission requirements continue to grow rapidly,” Rosenberg concluded.

An excerpt of this carrier Ethernet services market research report, table of contents, and ordering information is available online at http://www.insight-corp.com/reports/ethernet11.asp . This 162-page report is available immediately for $4,695 in an electronic format (PDF) and can be ordered online. 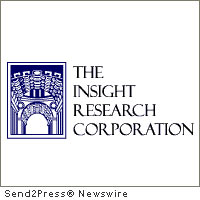 NEWS ARCHIVE NOTE: this archival news content, issued by the news source via Send2Press Newswire, was originally located in the Send2Press® 2004-2015 2.0 news platform and has been permanently converted/moved (and redirected) into our 3.0 platform. Also note the story “reads” counter (bottom of page) does not include any data prior to Oct. 30, 2016. This press release was originally published/issued: Wed, 07 Sep 2011 20:50:09 +0000

LEGAL NOTICE AND TERMS OF USE: The content of the above press release was provided by the “news source” Insight Research Corporation or authorized agency, who is solely responsible for its accuracy. Send2Press® is the originating wire service for this story and content is Copr. © Insight Research Corporation with newswire version Copr. © 2011 Send2Press (a service of Neotrope). All trademarks acknowledged. Information is believed accurate, as provided by news source or authorized agency, however is not guaranteed, and you assume all risk for use of any information found herein/hereupon.