The Risk Innovator Award recognizes professionals from a variety of industries who have demonstrated innovation and excellence in risk management. As one of only 18 recipients of the 2011 Risk Innovator award, McMullen and the PowerGuard team were recognized for their work in developing unique solutions for the wind and solar energy sectors including PowerGuard’s PowerClip™ warranty coverage and PowerWrap™ solar project guarantee policy.

“We are very pleased and honored to be recognized by Risk & Insurance for our warranty coverage and other financial solutions in the solar and wind energy markets,” noted McMullen. “The PowerClip and PowerWrap products are making it possible for alternative energy to progress in areas where growth has been stymied in recent years. It is very rewarding to have others recognize the value of these products and their ability to act as a catalyst for growth in the alternative energy field.”

In addition to being honored as a 2011 Risk Innovator, McMullen was awarded the Responsibility Leader designation. As one of only 8 recipients chosen from the 2011 Risk Innovators class, McMullen was tapped for the Responsibility Leader designation due to his success in developing unique and practical risk solutions in the energy sector that have benefited the organization, employees, and community. The award also acknowledges McMullen’s commitment to doing the right thing as opposed to the easy thing in overcoming obstacles.

About PowerGuard Specialty Insurance Services:
PowerGuard is a Managing General Agent specializing in the design and underwriting of unique insurance and risk management solutions for wind, solar and other alternative energy companies.

PowerGuard’s PowerClip warranty product is the most comprehensive contractual liability coverage available to renewable energy manufacturers, project developers, power generation operators and the financial institutions who invest in them. 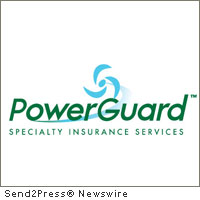 NEWS ARCHIVE NOTE: this archival news content, issued by the news source via Send2Press Newswire, was originally located in the Send2Press® 2004-2015 2.0 news platform and has been permanently converted/moved (and redirected) into our 3.0 platform. Also note the story “reads” counter (bottom of page) does not include any data prior to Oct. 30, 2016. This press release was originally published/issued: Wed, 21 Sep 2011 19:57:26 +0000

PowerGuard is a specialty renewable energy program manager specializing in the design and underwriting of unique insurance and risk management solutions for wind, solar and other alternative energy companies.

LEGAL NOTICE AND TERMS OF USE: The content of the above press release was provided by the “news source” PowerGuard Specialty Insurance Services or authorized agency, who is solely responsible for its accuracy. Send2Press® is the originating wire service for this story and content is Copr. © PowerGuard Specialty Insurance Services with newswire version Copr. © 2011 Send2Press (a service of Neotrope). All trademarks acknowledged. Information is believed accurate, as provided by news source or authorized agency, however is not guaranteed, and you assume all risk for use of any information found herein/hereupon.