LOS ANGELES, Calif., April 9, 2012 (SEND2PRESS NEWSWIRE) — Whether you call it publicity, media relations or hype, everybody needs it and John Scott G has been providing it for a decade. “Just by visiting the Internet, you have been influenced by our work,” states the head of G-Man Marketing (www.gmanmarketing.com). “We create and publish media announcements, press alerts, video messaging, social networking communication, and what I call ghost marketing.”

The concept of “ghost marketing” is not new, G admits. “In addition to books I’ve ghost-written, some of my most effective work has been behind-the-scenes, writing or contributing to articles or in disseminating items for others to post. Clients, especially artists, don’t have time to continually look for these opportunities online, but it’s one of the things we do. It’s time-consuming, but there’s a definite payoff if you keep at it.”

Current clients of G-Man Marketing include Shady Hill Records’ country artist Sandra Piller. “This is a terrific account because of the variety of great songs Sandra performs,” G states. “She works with writer/producer Jane Bach (hits with Reba McEntire and Jo Dee Messina among others) and there are videos of Sandra doing songs by The Doors and Fleetwood Mac. Her cool country version of ‘Love Me Two Times’ is a trip!”

Within the past year, G has worked with Larisa Stow, Robin Hood Music, Golosio Publishing, Goodnight Kiss Music, Anisound Mixing/Mastering, FookMovie, Phil Hatten Design, Carnyville, Bella Swan Bass Society (BSBS), and Paula Franceschi. “We’re starting on a Christian music video for ‘Amazed by the Light that is You,’ a new area for us.”

The sounds of BSBS are in a series of humorous commercials airing during the Sheena Metal programs on the LATalkRadio network. The spots are for non-existent products called “Androyx,” like an Androyx energy drink and an Androyx phone (“Forget 3G, 4G or 5G, Androyx offers 157G!”).

G and G-Man Marketing have created work for Verizon Wireless, Goodyear, Auto Club, General Dynamics, Shakey’s Pizza, Toyota of Orange, and more. In addition, G collaborated with Doug Colosio, Scott Joss and Merle Haggard to write “Bad Actor,” a song on Haggard’s “I Am What I Am” album.

“I love spreading the word for music, products, speeches, and events,” G says. “This work is exciting and gratifying, which makes it fulfilling to start every day!” 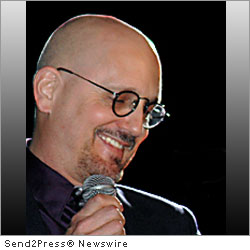 NEWS ARCHIVE NOTE: this archival news content, issued by the news source via Send2Press Newswire, was originally located in the Send2Press® 2004-2015 2.0 news platform and has been permanently converted/moved (and redirected) into our 3.0 platform. Also note the story “reads” counter (bottom of page) does not include any data prior to Oct. 30, 2016. This press release was originally published/issued: Mon, 09 Apr 2012 11:27:44 +0000

LEGAL NOTICE AND TERMS OF USE: The content of the above press release was provided by the “news source” Scott G The G-Man or authorized agency, who is solely responsible for its accuracy. Send2Press® is the originating wire service for this story and content is Copr. © Scott G The G-Man with newswire version Copr. © 2012 Send2Press (a service of Neotrope). All trademarks acknowledged. Information is believed accurate, as provided by news source or authorized agency, however is not guaranteed, and you assume all risk for use of any information found herein/hereupon.