DAYTON, Ohio, Nov. 27, 2018 (SEND2PRESS NEWSWIRE) –- The 571 Grill & Draft House in New Carlisle, Ohio has been in business for 18 years and the independently owned restaurant continues to carve out its name in the world of gastro pubs and draft houses. While some restaurant owners may sit on their laurels after what seemed to be an instant success with residents living north of Dayton, the owners of 571 Grill understand that you must either go big or go home. 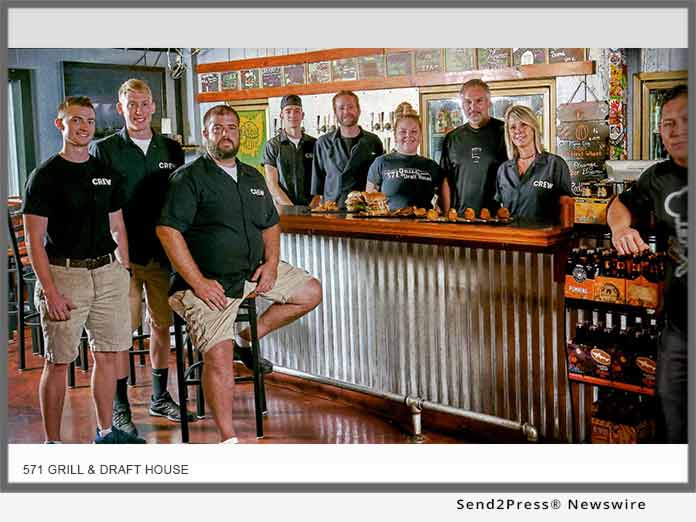 “We have never taken our reputation for granted,” Tim Juday, co-owner of the 571 Grill & Draft House, says. “Our kitchen staff is always working on new innovative creations, while our front-of-house employees are constantly training to provide higher levels of customer service.”

And, all those efforts continue pay off. Year after year, this Midwest establishment manages to top “best of” lists in multiple categories.

For instance, just last year, it made the, “The 6 Best Places to Grab a Burger in the Midwest” and just in October, the 571 Grill & Draft House found its way as a featured establishment in the Gordon Food Service publication Next Course in its article “More than another Roadside Attraction” while in 2016 the restaurant’s most favored menu items were recognized by Dayton.com in “4 Delicious Burgers that are Worth the Drive.”

One thing that sets the 571 Grill & Draft House apart from other Midwest burger joints is its deep respect for craft beers.

“Personally, I would have a hard time arguing against a craft beer when eating one of our featured burgers,” says Juday “our locally sourced menu items have so much flavor packed into them, that any less bold of a beverage doesn’t do them justice.”

The establishment offers 17 rotating craft beers along with two craft sodas on tap. Beer lovers can also make a craft selection from an array of beers in chilled bottles and cans. Restaurant patrons are encouraged to ask questions about the beers on tap, as the servers are well informed to help pair the perfect beer with your food selection.

“We couldn’t be more pleased that our brand continues to get such positive recognition – year after year. And who knows what’s in store for us next?’ Let’s see what happens,” Juday says.

More from 571 Grill and Draft House

ABOUT THE NEWS SOURCE:
571 Grill and Draft House

571 Grill & Draft House in New Carlisle, Ohio offers the largest selection of craft beers in town, over 125 varieties, showcasing many of the finest breweries around. We select some of the most highly rated beers available, from IPA's to Stouts and lots in between, including seasonal and limited release beers

LEGAL NOTICE AND TERMS OF USE: The content of the above press release was provided by the “news source” 571 Grill and Draft House or authorized agency, who is solely responsible for its accuracy. Send2Press® is the originating wire service for this story and content is Copr. © 571 Grill and Draft House with newswire version Copr. © 2018 Send2Press (a service of Neotrope). All trademarks acknowledged. Information is believed accurate, as provided by news source or authorized agency, however is not guaranteed, and you assume all risk for use of any information found herein/hereupon.