SAN FRANCISCO, Calif., Dec. 19, 2013 (SEND2PRESS NEWSWIRE) — CandyLipz® LLC announced this week that it is the recipient of the Chicago Athenaeum: Museum of Architecture and Design and The European Centre for Architecture Art Design and Urban Studies GOOD DESIGN™ award. Since the product launch, the Xtreme Lip-Shaper® System has received many positive reviews, and now its design is getting noticed too.

Around since 1950, the GOOD DESIGN™ award remains the oldest and the world’s most recognized program for design excellence, worldwide. 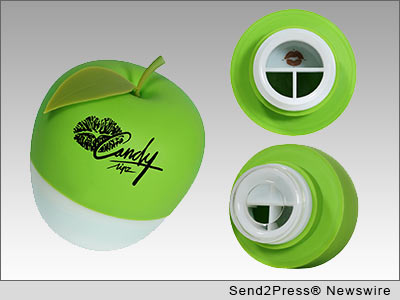 “The museum received submissions from several thousands of the world’s leading manufacturers and industrial and graphic design firms from more than 48 countries. I am so proud and humbled to be the recipient of such a prestigious design award because awarded corporations include some of the world’s most visionary companies such as Apple Inc., Mercedes-Benz and Samsung,” Dr. Thienna Ho, inventor of CandyLipz®, says.

In addition to the GOOD DESIGN™ award, the Xtreme Lip-Shaper® System also won a gold medal for technical design at INPEX, America’s largest invention show, and, additionally, Dr. Ho was named “Woman Inventor of 2013” by Korea Invention News. The product has been featured in multiple news stories, and has also had live, on-air demonstrations on CBS Good Day Sacramento, San Diego Living, Star 94.1 FM and other media outlets.

CandyLipz® Xtreme Lip-Shaper® System is clinically-proven safe for intended use. The device uses a 3,500-year-old Chinese “cupping” method (suction) and is coupled with advanced lip-shaper technology to instantly shape, contour and enhance the lip’s appearance.

The Xtreme Lip-Shaper® System is easy to use and produces noticeable results in two minutes; results last for hours. The CandyLipz® lip pumps are available in several different designs which allow users to create single or double-lobed lips. For many users, it’s their go-to lip shaping product. In fact, there’s even a term for using it – CandyLipping.

Dr. Ho adds that the patent-pending design of her invention means that other companies can’t deliver the same product or results.

Visit the website at: http://candylipz.com/ or view a product video: http://youtu.be/ujsyoK6hTgI.

NEWS ARCHIVE NOTE: this archival news content, issued by the news source via Send2Press Newswire, was originally located in the Send2Press® 2004-2015 2.0 news platform and has been permanently converted/moved (and redirected) into our 3.0 platform. Also note the story “reads” counter (bottom of page) does not include any data prior to Oct. 30, 2016. This press release was originally published/issued: Thu, 19 Dec 2013 14:24:18 +0000

View More Beauty Cosmetics and Spa News
"The museum received submissions from several thousands of the world's leading manufacturers and industrial and graphic design firms from more than 48 countries. I am so proud and humbled to be the recipient of such a prestigious design award because awarded corporations include some of the world's most visionary companies such as Apple Inc., Mercedes-Benz and Samsung," Dr. Thienna Ho, inventor of CandyLipz, said.

LEGAL NOTICE AND TERMS OF USE: The content of the above press release was provided by the “news source” CandyLipz LLC or authorized agency, who is solely responsible for its accuracy. Send2Press® is the originating wire service for this story and content is Copr. © CandyLipz LLC with newswire version Copr. © 2013 Send2Press (a service of Neotrope). All trademarks acknowledged. Information is believed accurate, as provided by news source or authorized agency, however is not guaranteed, and you assume all risk for use of any information found herein/hereupon.